Arrows of Time: A Review 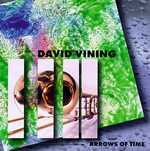 I have never met David Vining but I suspect he is a confident man. My evidence? His 1999 CD entitled Arrows of Time. For starters, recording a solo CD is no small undertaking. It takes a large investment of time and often money. Second, Vining's choice of repertoire is not only varied and challenging but, in the case of two selections, covers ground recently explored by Joe Alessi on his New York Legends recording. It is not a timid man that records Peaslee's Arrows of Time and Ewazen's Sonata right on the heels of one the world's greatest trombonists. Should you have any lingering doubts about Vining's confidence, they should be effectively erased by the fireworks of his Carnival of Venice variations which closes this CD.

Vining's confidence is well-deserved. Throughout this recording he combines technical mastery and artistic sensitivity in a wide variety of musical styles. The recording begins with Richard Peaslee's fabulous new work, Arrows of Time (1993-1994). This three-movement jazz-influenced piece, written with consultation from Joe Alessi and Jim Pugh, demonstrates a clear understanding of the instrument and a willingness to push the performer's limits. Vining aggressively attacks the piece's first and last movements with a sense of eagerness for the next challenge. He tends to employ a sharp, articulated style that, for the most part, suits these outer movements well. The second movement's jazz ballad style has no shortage of high notes ranging up to F. Vining's relaxed, lyrical style allows enjoyment of the movement's poignancy without the distraction any high range struggles. At times I find his musical approach a bit too methodical. For example, nuances such as scooped notes seem more planned than improvised.

The second selection, Goedicke's Improvisation, is a short, lyrical work which falls mostly in the trombone's comfortable middle register with the unusual exception of the final note which inconclusively hangs on a high C. Vining does a nice job of presenting this piece in a relaxed manner without trying to blow things out of proportion.

I must admit to having to some ambivalence about the third selection, Eric Ewazen's Sonata. This eighteen-minute musical journey has many wonderful moments but I'm not convinced that they add up to a cohesive whole. I can't escape the feeling that, if only Ewazen's wonderful musical ideas were presented more concisely, they might combine for a greater impact. Vining skillfully controls his dynamics to bring out the work's long, arching lines. At times I feel his tendency towards pointed articulations, so effective in Arrows of Time, doesn't quite work for this piece. My only other concern is the occasional distortion of the sound during Maestoso passages. This is especially true in the middle and low registers. These concerns are minor in an otherwise fine performance.

The odd thing about any recording of Berio's Sequenza V is that, by necessity, they cannot contain any of the visual elements that help to make this such an effective piece. This concern aside, Vining delivers an exceptionally clean performance of this virtuoso avant-garde work. Berio bombards the performer with a variety of unusual performance requirements including precise manipulation of a plunger mute, alternation of singing and playing, multi-phonics (simultaneously singing and playing), imitation of vowel sounds and notes to be sung while inhaling. On top of all this, the performer must effectively play the role of Grock, a famous European clown.

Simply digesting Berio's notation is a daunting task. While the casual listener may only perceive fairly random "bleeps and bloops," closer analysis will reveal that Berio carefully creates a multi-layered counterpoint reminiscent of Baroque compound melodies. Performers familiar with this piece will appreciate Vining's accuracy especially with his sung notes. Two weaknesses should be noted. First, inhaled singing in the low register can be quite difficult or impossible for some. Vining transposes these pitches up an octave, weakening Berio's careful attention to register. Second, a traditional problem in multi-phonics is getting a reasonable balance between the voice and the trombone. Vining's performance suffers the same fate as that of many other fine performers: his voice during multi-phonics simply isn't loud enough to bring out much of the counterpoint between sung and played pitches.

The recording finishes with two "lollypops:," Cole Porter's Begin the Beguine and Arban's variations on The Carnival Venice. Vining's beautiful singing tone successfully carries him through a rather straightforward interpretation of this short Porter tune. As for the Arban, Vining's biography comments on his "interest in fast slide manipulation." For this kind of raw technical prowess, Vining is the equal of any player I have ever heard. During long rapid passages, he does a particularly good job of bringing out some notes while allowing others to fall into the background. This creates the startling illusion of two trombonists playing simultaneously. Fasten your seatbelts and have fun!

In a solo trombone world seemingly dominated by such titans as Joe Alessi and Christian Lindberg, it is refreshing to hear a new artist who combines compelling musical ideas with effortless facility. I highly recommend this recording and hope that we will hear more from Mr. Vining in the future.