Beyond the End of the Century: A Review 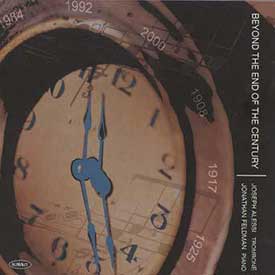 The recording opens with a wild slide glissando that grabs the listener's attention and immediately transitions into one of the recurring motifs of the first piece. This motif resembles one of the themes from Strauss' Also Sprach Zarathustra because of the ascending chromatic line and descending line afterward. One of the challenges of performing Crespo's "Improvisation No. 1 for Trombone Solo" is maintaining the stylistic integrity of the motif as it moves around different registers and varying volume levels, which is done superbly on this recording. The opening portion of this piece trades between slide glissandi and the Zarathustra-ish theme. The close of the first section is marked with a brief fanfare with Spanish flair before returning to the Zarathrustra-ish theme. The next large section remains in tempo, but switches to a 7/8 groove that is missing all the normal metric checkpoints we normally associate with that meter. Again, we return to more glissandi and alternate between the groove and 16th-note triplet, ending with the Zarathrusta theme. Alessi highlights the quartal intervals used throughout the rapidly articulated passages. Maybe it is just me, but the quartal harmony always conjures memories of "Star Trek: The Next Generation's" opening sequence. This piece was an ideal opening track, as it displays multiple musical styles and the technical proficiency of the performer.

According to Filas, "Sonata for Trombone" captures "the modern world's two contrasts, hope, and disappointment." These two musical ideas alternate as the eleven-minute piece progresses. Filas's use of the mute helps add interest to the piece as it evolves. The mute changes have enough rest before the next entrance to not make them feel frantic during a live performance, with the exception of one change towards the beginning of the piece. Mute timing is a non-issue when recording an album, and this recording represents the composer's intent without any extraneous noise that may occur in a live performance. I listened to this piece while following the solo part on my laptop, and the first thing that stuck out was the consistent commitment to differences between all of the articulation markings. As teachers, we have all told our students to be overt with their musical ideas so that the audience can dictate every nuance in their playing. This track is a demonstrative example of how to achieve that goal.

Originally a part of "Divertimento for Harmony Ridge for Brass Quartet and Piano," composer Allen Bonde adapted the piano part to include material played by other members of the quartet to create "Ballad In Blue." This straightforward blues chart was the perfect addition to the recording, acting as a bit of levity to the surrounding serious pieces. While most people associate Alessi with his position in the New York Philharmonic, this showcases his ability to be an amazingly versatile musician with a full understanding of creating any scene for the audience to enjoy. The extremely limited use of upper dynamics (only 5 bars at forte or above) helps add to the piece's character and laid-back feel.

"Arctic Emanations" by Norman Bolter is comprised of nine sections: Introduction (m.1), Deep wide horizon (m.18), Big Landscape (m.36), Slower warm Arctic poppy (m.49), Icebergs and ice slides (m.78), Eskimo children's song (m.109), Coming up to winter (m.145), Winter, night all day (m.151), Aurora Borealis (m.175). The opening piano sets a cold, sparse mood with repeated fragments until a muted trombone entrance. The trombone is asked to repeat notes with different slide positions to create slightly different colors, which Mr. Alessi handles beautifully. As these points reoccur, Bolter provides specific instructions for the player on creating these moments and his intent to recreate an "echo or ricochet of sound." A great asset of this piece is how the piano provides amazing segues between the thematic areas, both in completing the current idea and moving into the new. It is obvious both performers capture the intended scene in articulation, tone, and relative volumes.

The astonishing thing about this recording of Premru's "Concertino for Trombone and Woodwinds" is the amount of nuance and dynamic contrast that Alessi is able to create, all while maintaining a sound that does not overpower the woodwind ensemble. This piece is presented in three tracks corresponding to the movements, showcasing different compositional techniques and giving all the instruments an opportunity to shine. My favorite is the third movement, as it allows the trombone to have more interplay with the ensemble in a conversational manner after an opening fugal section. This movement leads perfectly into the Hidas, and it begins to bridge the gap from the trombone being the fifth member of the woodwind quintet, into being the primary voice on the following track.

The opening of the Hidas conveys a sense of sorrow that is immediately understood by the audience. As the theme begins to make its way into the upper register, the mood transforms to angst before returning to the middle register. Alessi does a phenomenal job of creating these emotional states through varied dynamics, vibrato, and intensity of tone. The Allegro section requires rapid tonguing and maintaining the same tone and style throughout different registers. I would equate this section to more of a scherzo than a traditional 6/8 because of the initial lack of downbeats in the solo part. I enjoy how the entire piece moves back and forth, with each section having a portion of its earlier version elaborated upon. Simultaneously, it brings a sense of familiarity and freshness to the listener. While only a bit under seven minutes, the closing lines are technically simple compared to the rest of the piece, but its simplicity allows this performance to maintain emotional value and keep the listener drawn in until the final piano chords fade away.

Finishing the recording is "Spécial" by Pierre Gabaye, arranged for solo trombone and eight trombones by Paul Hunt. In this impeccable performance, Alessi features the Juilliard School Trombone Choir, composed of many players that have gone on to have very successful playing careers. The energy from bar 1 grabs your attention and maintains the bravado until a set of interludes throughout, and then the ensemble returns to their initial energy level. The immediacy of changes in style and timbres gives the listener the feeling that they accidentally changed the channel and something completely new is playing. This piece would provide a great ending to any concert and ends this recording on a high note.

"Beyond the End of the Century" on Summit Records was originally released in 1998 as "At the End of the Century" by the International Trombone Association. The ITA commissioned this project specifically for Alessi to showcase new compositions. The recording runs 62 minutes in length and is available on Apple Music, Amazon Music and Spotify.