Sonata for Bass Trombone and Piano by Timothy Bowers: A Review 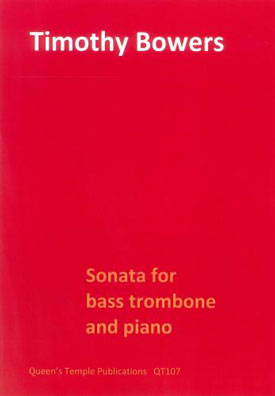 Composed in three movements, Timothy Bower's Sonata for Bass Trombone and Piano brings a new flavor into the bass trombone repertoire. Each movement contains unique ensemble challenges that, when executed correctly, can make the piece come to life and provide the listeners with an intriguing fifteen-minute performance. The solo part spends the majority of the work living in and around the bass clef staff, making its way up to numerous G4s and a few A♭1s during critical moments, such as measures 22 and 197 of the first movement and measure 101 in the third movement. On the opposite side of the range, the pedal register showcases both the lyrical style and musical effect that only a bass trombone can bring to the color palette. Compositionally, this piece is built around the consistent use of the minor third interval. It is the first interval present at the beginning of style changes in the music ties the entire composition together, as it is always the first interval heard in solo entrances throughout each movement, as seen below.

The first movement is presented in three distinct musical sections; Allegro piacevole (m. 1), Meno allegro, ma ritmico (m. 132), and a third non-named section that overlays the initial trombone melody with the rhythmic patterns of the piano from the second section (m. 177). The piece opens with a solo line that begins as a simple folk song that immediately transitions into multiple tonal centers, making it difficult to perceive any home base tonic. The piano enters in the left hand doubled in octaves, repeating the opening trombone material, creating different harmonies as they interact.

Once the left hand completes the entire line, the piano's right hand begins, almost as a third round entrance. This is where things begin to get interesting from an ensemble standpoint. The piano moves in and out of a 4:3 pattern between both hands, until the bass trombone re-enters and the left hand begins another imitative entrance. As this portion of the movement concludes, the rhythm normalizes to a standard 3/4 pattern until the solo line takes up a 4:3 bar to help set up the second portion of this movement, Meno allegro, ma ritmico. There are two recurring motifs in this section; 1) a descending minor 3rd interval, and 2) a Hindemith-esque jazz figure. The performer needs to heed the ma ritmico portion of the title, as there are a few bars of superimposed 6/8 solo over the 3/4 of the piano. Similar to the first portion of this movement, there are recurring round style entrances. After a brief piano feature, the soloist returns with the opening motif of the entire movement, accompanied by the continuation of the Meno allegro piano parts. The voices continue in this manner until the soloist rejoins the piano style four bars from the end of the movement.

The second movement, Lento, begins with the piano and is primarily in 5/4 (3+2), with only a handful of bars not fitting this pattern. During much of the opening segment, the piano relies on longer, dissonant note durations to create an unsettled feeling. This feeling is added to by having the soloist utilize a harmon mute with the plunger removed for the entirety of this movement. After each performer has a chance to showcase their individual phrasing, both parts finally join in ensemble halfway through the movement beginning in measure 10. The dynamics begin to swell up and down like a rolling hill until the climax, which quickly dissipates down two and half octaves in the solo line to a pedal B♭1. The piano then takes over with a less active melodic line than it had at the opening until the movement rests with a final extended chord.

The final movement, Vivo, is a mixed-meter lover's dream. Marked at 8th note equals 300 bpm, there is a frenetic feel to the opening phrases until the composer arrives at longer note lengths by the soloist to provide a more controlled feel to the listener. A brief piano featurette (beginning in measure 63) maintains a 3/4 feel until morphing back to a fixed meter into the soloist's next entrance. However, instead of continuing with the established feel, the solo line moves into a sustained legato section with the piano alternating between a matching accompaniment and fragments of sporadic energy underneath the soloist. As with previous movements of the piece, the soloist and piano trade lines until they finally meet up at the first climax of this movement, which fades after a series of glissandi down to a low D♭2 and a pianissimo piano section, reminiscent of a similar section in the second movement. The following section maintains a 6/8 structure with the soloist and a 3/4 feel in the piano with a slow chromatic rise in the left hand (m. 111). The movement then returns to a recapitulation of the opening frenetic mixed-meter section. As the piece makes its way to the final area, we find a poco meno mosso with round entrances between the piano and soloist until the return of the tempo primo. The last bars of the piece are high energy and high volume from both players, exploring more mixed-meter and rests to return to the frenetic feel of the opening.

Overall, this piece can provide the audience a wide variety of scenes and emotions. I think a live performance would benefit from brief musical examples and program notes before the entire piece to help the audience follow the compositional motives in the work. While looking at a score, these are very evident, but these elements may slip away from the listener in live performance. As a performer preparing this piece, I would recommend treating the score as a music theory assignment and trying to dig out as much of the composer's intent as possible.