What Have I Done? A Review 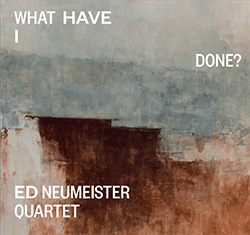 I was fortunate enough to be able to hear Ed Neumeister play live with the Village Vanguard band, and again in 2002 when I attended a clinic he gave at the IAJE conference. If I recall correctly, he gave a lecture about using 'play' as a means for warming up and learning technique. He then proceeded to play the entire range of the instrument, including double pedal notes on his medium sized straight tenor trombone. Needless to say; I was impressed.

Neumeister started as a professional in his teens in the Bay Area. Gerry Garcia, marching bands, Chuck Berry, Ella Fitzgerald, Sarah Vaughn and Frank Sinatra were all stops along the way on his eventual landing spot of New York in 1980. Lionel Hampton, Duke Ellington, Mel Lewis, Buddy Rich and many other gigs all served as a fertile education for his prodigious compositional output.

As a composer, Ed has worked everyday for the past thirty years. He began this habit as an inaugural member of the BMI workshop. A trombonist who composes has morphed into a composer who plays trombone.

What Have I Done presents eight new Neumeister compositions with brief interludes, or as he calls them, amuse-bouches by different members of the quartet, and what a quartet this is. Gary Versace on piano, Drew Gress on bass, and Tom Rainy on drums. Gress and Rainey have played in many bands and situations, while Gress, Versace, and Rainey each have personal connections that span decades with Neumeister.

Riverwalk opens with a plungered Neumeister in what I would call a contemplative melody. Instantly the connection of the rhythm section is evident. There is something for every musician on this opening. Neumeister offers short bursts of expressive solo filled with lines, growls and shapes. Interspersed between these statements are juxtaposed piano interjections with a more grounded approach. Gress takes a short bass solo and we are once again treated to a more composed element. This is highly a structured composition but filled with more than enough moments for the musicians to express themselves.

Gratitude could almost be a showcase for the drums as the melody is filled with drum 'comments' in between the angular syncopated opening line. Neumeister takes a solo over the opening statement, and while this is not an 'out' solo, my guess is that there are no chord changes at this part of the composition. Soloing without changes is something Neumeister is comfortable doing. A brief piano solo and then a composed element that is played by the band. Tom Rainey takes a musical drum solo over a groove set up by Gress and the composition opens up to find its way to the end in an organic way that finds a short, composed statement to conclude. Acclimation Park is a nod to Neumeister's favourite jogging trail in Sao Paolo so naturally it is a Samba.

At this point in the recording it is clear that Neumeister is a solely unique trombonist. His solos are filled with his own 'language;' expressive, fun, playful, even perhaps a bit dangerous. The trombone in Neumeister's hands is a vehicle to make his intentions heard. Neumeister is a risk-taker, he is a seemingly fearless individual. This fearlessness extends to his compositions. Ridgewood is an odd meter exploration grouping 9/8, 17/16, 5/8 and 11/16, and while thinking about playing something like this hurts my brain, let alone soloing over this, these performers make it sound as if this is the most natural thing to do. These are highly skilled and talented musicians, who also play like they have been in this band for decades. Everyone in this quartet has a big role and it is difficult to imagine another musician playing in their place.

Neumeister wrote Renate for a recently departed friend and as Neumeister says "It's sing-songy in nature, but harmonically far away from ii/V/I. It's built on a pattern in 10/4, two bars of 3 with one bar of 4, with a swing feel, reminiscent of Elvin Jones."

Inclusion is perhaps the composition that is most like a traditional song form. There is a melody, long and winding, full of twisting and turning lines, with 'comments' from the ensemble before a trombone solo that starts over an ostinato that quickly dissolves into controlled mayhem, then gradually settles into contemplative musings from the band. Each musician takes a turn at expressing themselves, until the melody presents itself again. Neumeister's overall use of form as a composer is, to me, almost as interesting as the compositions themselves. He is inventive and creative in the use of form, some of which seems improvised and some of the improvisations seem composed, a fascinating compositional style.

The CD ends with Chill'n and the title track What Have I Done? Chill'n features Gress in an extended solo, while What Have I Done? highlights Neumeister with a plunger and pixie mute that pan playfully from speaker to speaker for an extended opening giving us our first extended solo trombone moment. A soulful composition that represents to Neumeister the end of a marriage and the beginning of a new relationship. Short and sweet without improvisation, the perfect ending to this recording.

What Have I Done? will be released on October 15, 2021. The following sound clips have been shared with permission from Red Cat Publicity.