Half Man, Half Machine: A Review 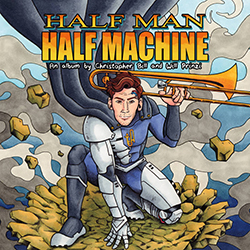 Half Man, Half Machine is a very accurate description for one of a kind artist Christopher Bill. It is difficult for us mortal trombonists to comprehend what Christopher does on the trombone, as well as with technology. Christopher continues to amaze millions of people around the world with his YouTube channel. Many know Christopher through his viral videos such as the one featuring his arrangement of Pharrell Williams' Happy, which has over five million YouTube views. Some may not know that Christopher studied classical trombone performance at SUNY Purchase before his musical interests later shifted to jazz, reggae, funk, and eventually to pop music.

Half Man, Half Machine is Christopher Bill's third solo album and was released in 2017. This album is a departure from his first two solo albums. Christopher's first album features arrangements of existing pop songs, while his second album features arrangements of Christmas songs. Both of these albums feature really clean, virtuosic trombone playing, and are really fun to listen to. For his third album, Half Man, Half Machine, it is worth noting that Christopher composed about seventy-five percent of the music. He also wrote the lyrics for many of the tracks, performed all of the trombone, vocal, and keyboard parts, and finally co-produced the album with Will Prinzi.

The first track, "Power Down," is certainly one of the highlights of the album. This track (composed by Christopher) starts off with him singing a soulful, ballad-like melody while accompanying himself on keyboard. This eventually shifts to a robotic voice counting down with "sequence start...3, 2, 1," which quickly leads in to a full-fledged funk fest. The trombone parts and voice enter, as well as drums and a groovy bass line (both performed superbly by Will Prinzi). Christopher effectively incorporates auto-tune into the second half of this track, which gives it a modern pop feel. This track very successfully blends pop and funk elements. It is nearly impossible to not get up and dance while listening to this track.

The second track, "Mountains, Gandalf" (written by Will Prinzi) has a folk-like quality to it, while still retaining pop elements. Christopher's singing really shines in this track, flawlessly moving in and out of multiple vocal ranges. The poetic lyrics mesh perfectly with the soulful trombone playing to produce another stand-out track.

The third track, "Smile" is completely different as it starts off with humorous dialogue between Christopher and a bridge troll (voiced by Will Prinzi). In the dialogue, Christopher offers to demonstrate looping to the troll in order to gain passage across the bridge. He then proceeds to loop the dialogue in a Steve Reich-esque manner. This eventually morphs into an auto-tuned melody accompanied by a very energetic house music-esque drum beat. This is followed by a smokin' trombone solo performed by Christopher.

The remaining tracks feature notable elements such as impressive falsetto singing and scatting performed by Christopher ("I Can't Lie"), a beautiful vocal duet with Addi McDaniel ("Westward Winds"), and one instrumental-only track that utilizes a cantata written by J. S. Bach ("All My Days"). With so much variety from track to track, the listener is guaranteed to be constantly engaged.

This album deserves to be heard by anyone who is a fan of the trombone. The fact that Christopher is able to perform on trombone and voice at such an incredibly high level, in addition to seamlessly combining all of the technological elements, makes him the epitome of the consummate musician. Hopefully, Christopher will continue to compose new music and release more solo albums in the near future.

Sound clips and purchase information for Half Man, Half Machine is available through Christopher Bill's web site.