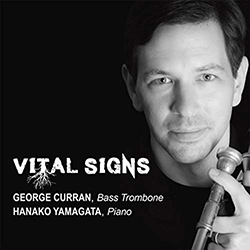 Vital Signs, a three-movement work originally for solo bass trombone and wind ensemble was premiered by Curran at Gillingham's current teaching position, Central Michigan University. Of the 25-minute work Gillingham writes, "The concerto seeks to depict the 'vital signs' of the earth as related to global warming." The pieces follows a familiar fast-slow-fast format with the associated movement titles of "Heat Wave," "Glacial Retreat," and "Deluge." As might be expected, the mood is foreboding and fits Curran's talents quite well. Gillingham makes powerful use of recurring minor and diminished-scale motives interspersed with virtuosic solo flourishes. Readers may be familiar with Gillingham's Sonata. This piece is of a similar high quality and has a powerful dramatic impact. Hanako Yamagata, by now a familiar name with trombone recordings, ably handles a complex score reduction. It is a sheer joy to hear the facility with which Curran moves into and out of the pedal range.

Jascha Heifetz arranged Gershwin's Piano Preludes for solo violin and piano. Similarly inspired, Curran created this three-movement adaptation for bass trombone and piano. His performance is at times playful, bluesy and technically awe-inspiring. If only earlier composers could hear such performers, our instrument's history would be radically altered.

Alan Pierce is the retired bass trombonist of the Oregon Symphony. Dedicated to Curran, Pierce's Romanza-Scherzo arose out of a challenge from Charlie Vernon to compose something "with lots of tunes." The "Romanza" brings forth a rich romantic palette that may remind some of Lebedev's Concerto. Curran's lyrical approach in the "Romanze" spans a wide tessitura but avoids any unnecessary showmanship. The "Scherzo" stays true to the humor implied in the title. Pregnant pauses fall between light, dancing tunes. At times, Curran demonstrates the extremes of his range in a way sure to induce appreciative smiles from the listener and respect from fellow bass trombonists.

The first movement of Derek Bourgeois' three-movement Bass Trombone Concerto shows the jaunty English tunefullness for which the composer has become well-known. The haunting middle movement presents dramatic tension beginning with a smooth melody in the very low range. In the middle of the movement, the clouds clear and a lighter mood appears. However, darkness returns at the close. The third movement, as might be expected from Bourgeois, is carefree and flashy. It seems there is very little Curran cannot accomplish musically or technically.

The final piece, Hymn for Planet Earth, for solo bass trombone and trombone ensemble was written for this recording project. Composer Steven Verhelst presents a hopeful note that serves nicely as a bookend to the foreboding tones of the Gillingham. The trombone ensemble behind Curran plays with a good blend of sound and intonation. This hymn's uplifting, reverential quality is reflected in Verhelst's words about the piece, "A ray of sunlight shines down upon the earth. The earth heats up and glows. A stunning planet begins to move..." This warm sense of splendor continues throughout. While Curran's sound doesn't dominate the ensemble I actually could have used a bit more of his sound in the mix.

Both for his excellent playing and for the presentation of valuable bass trombone solo repertoire, George Curran is to be congratulated for an outstanding offering.