The Pipes are Calling: A Review 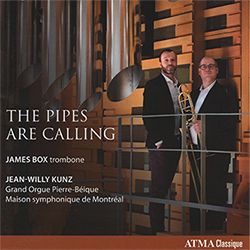 James Box and Jean-Willy Kunz's April 2019 release of The Pipes are Calling is an exceptional recording for trombonists and organists alike. Showcasing the strengths of these fine Montréal Symphony Orchestra (OSM) musicians while featuring their new concert-hall Casavant organ (le Grand Orgue Pierre-Béique), this recording shares over an hour of superb repertoire appealing to a wide range of listeners. James' playing is exceptional in all regards, commanding rapt attention in counterpoint with Jean-Willy playing the Montréal Symphony House's Casavant concert-hall organ. The bilingual French and English liner notes include performer biographies, a brief history of the organ in Québec, and rich details of the Casavant organ de Grand Orgue Pierre-Béique, purchased by Mrs. Jacqueline Desmarais as a gift in 2014 to honor the legacy of the OSM's founder.

The repertoire spans centuries, ranging from iconic examples of vocal lyricism to more contemporary contrapuntal displays of virtuosity. The combination of core repertoire and arrangements is well-programmed, and the playing is superb. Of significance are Harald Genzmer's Sonata and Malcolm Forsyth's Soliloquy, Epitaph and Allegro as compelling performances of these late 20th Century musical works. Their arrangements of the lyrical vocal works Ombra mai fu', Allerseelen, and Danny Boy showcase their musical sensibilities and explorations of the sound palette.

Available in compact disc and a range of digital streaming and downloading formats, ATMA has done a wonderful job ensuring access through a range of online platforms, including both their own site and Naxos Music Library. I have compared the recording on a range of devices and sound systems and have been thoroughly impressed with the consistent quality across platforms, devices, and streaming vs. playing of physical media. Although many of the tracks can be sampled online, the Genzmer and Forsyth works were not available for sample streaming on the ATMA site at the time of this review. The OTJ would like to share the following excerpts so that readers might listen to the final portions of these significant late-20th Century pieces.

Those wanting to consult a score of Malcolm Forsyth's Soliloquy, Epitaph, and Allegro for Trombone and Organ, published editions can be obtained from both the Canadian Music Centre and Cherry Classics. For audiophiles interested in listening to another recording of trombone and organ repertoire played on an older Casavant organ, I would recommend Alain Trudel and Patrick Wedd's The Art of the Trombone. This 1996 recording uses the historic 1913 (1991) Casavant Organ of Saint-Viateur Church, offering different stylistic interpretations of both the Morceau Symphonique and Genzmer's Sonata.

The Pipes are Calling serves as an excellent recording for trombone and organ audiophiles alike. The recording is of exceptional quality and the artists' compelling musicianship demonstrates the highest level of mastery.