The Chase: A Review 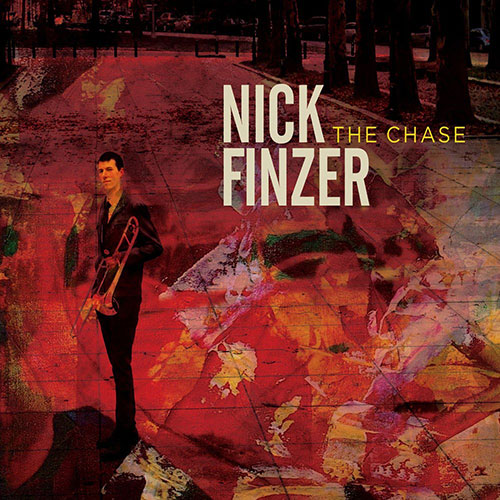 Award-winning composer, producer, entrepreneur, YouTube sensation, and trombonist Nick Finzer has given jazz sackbut junkies the fix they've been looking for with his release of "The Chase." Finzer's sextet of world-class musicians is comprised of two horns and four rhythm section members, though guitarist Alex Wintz is often treated as a third "horn" in Nick's creative orchestrations. Nick Finzer produced "The Chase" himself and is the composer of all tracks on this very enjoyable recording.

The opening track, Life Happens, features well-balanced three-part harmony between the trombone, tenor saxophone, and guitar on a unique melody with tight, crunchy harmonies. The open feel of the rhythm section lends itself well to short but tasty solos by Finzer, Pino, and Wintz. The underlying rhythmic vamp from the melody is used as the backdrop for a polyrhythmic party by drummer Jimmy MacBride to close out the solo section before the recap of the melody.

Finzer's eclectic writing style surfaces immediately with the 12/8 Afro-Cuban groove on Spheres of Influence. Wintz and Zaleski are a formidable team backing the horn soloists through colorful tone palettes that creatively support without detracting from the soloists. Nick's blazing solo is complete with complex rhythms that organically merge with the spontaneous polyrhythms of the rhythm section. Finzer and Pino trade ideas at the end before morphing into collective improv while MacBride jams out!

All Hype is a straight ahead swinger with many unison lines by guitar, sax, and trombone that occasionally diverge into harmonies that sound surprisingly full for such a small group. J. J. Johnson enthusiasts (anyone reading this journal probably is) may detect some of the master's influence in parts of Nick's masterfully crafted improvised solo.

Steadfast opens with just guitar introducing a hypnotic vamp that resurfaces throughout the track. Far from boring, harmonies and melodic material shift around craftily over, under, and around the vamp. Pino plays bass clarinet and explores the entire range of the instrument and its unique timbre in the various registers. The listener is also treated to the first bass solo of the album by Dave Baron.

One might expect a tune entitled The Chase to kick off at a relentlessly blazing tempo, and the title track does not disappoint! But this song is much more than a virtuosic showcase displaying mind blowing technique (though it includes that, too). The interaction between soloists and rhythm section displays great depth of musicianship, and the 6/8 groove interspersed throughout the arrangement provides welcome relief from the typical barn burning flag waver.

Acceptance is a waltz with a twist: it's in 5/4 time and features some innovative contrapuntal writing between the horns and rhythm section. The line between traditional jazz combo roles becomes blurred as the horn players support the guitar solo with cleverly crafted backgrounds. Finzer's solo navigates the lopsided waltz beautifully with melodic ideas that seamlessly cross the bar lines and mask the difficulty of improvising in an odd meter. He makes it sound easy! At the end the tune slips into 6/8 from 5/4 so easily you don't even notice if you're not counting!

Nick Finzer developed a fascination for the music of Duke Ellington at an early age, performing in high school at the annual Essentially Ellington competition of Jazz at Lincoln Center. Lucas and Alex take a break on While You're Gone to allow Nick to do his best Tricky Sam Nanton imitation. And what an imitation it is! Innovative harmonies modernize the sound of the tune but the influence of the famous Ellington trombonist is unmistakable in this engaging ballad featuring the mournful, soulful sound of the ubiquitous toilet plunger with pixie mute.

Why Aren't You Excited is a jazz waltz (in three this time!) that features some nice counterpoint between the horns and guitar/piano. This track is chockful of hemiola, both planned and spontaneous. The baton is passed from one soloist to the next in an intriguing manner as the end of one solo overlaps with the beginning of the next blurring the line between melody and accompaniment.

Lucas Pino breaks out his bass clarinet again on Search for a Sunset. This straight-eighth tune at a moderately slow tempo is neither a ballad nor a bossa...it's just a really nice tune!

The "hook" on Just Passed the Horizon features bass double stops vaguely reminiscent of Cannonball Adderley's Sack o' Woe. The straight ahead up-tempo swinger features soloists that include Finzer, Wintz, Zaleski, and Pino all taking a ride on the closing track that fades into the distance as "The Chase" comes to an end after a very rewarding musical journey. Kudos to Nick Finzer and his cohorts!