Close Your Eyes...and Listen: A Review 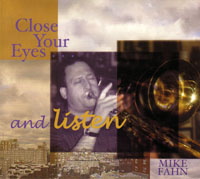 Mike Fahn established himself years ago on both coasts as a master jazz musician and virtuoso valve trombonist, but according to Howard Mandel's liner notes Fahn considers Close Your Eyes...and Listen (released in 2002) to be his true debut album. Most "real" (slide) trombonists turn up their nose at the thought of a "cheater" (valve) trombone. It brings to mind thoughts of horrific intonation, a lack of swing, and your high school jazz band where the 10th grade euphonium player (who wasn't all that good to start with) was handed a valve trombone because there were no real trombonists to cover the third part. But if you close your eyes and listen to this CD no such images will come to mind! Rather you are likely to open your eyes in surprise when you hear what the valve trombone sounds like in the hands of a world-class musician!

The ensemble achieves an open, uncluttered sound by varying the make-up of the rhythm section throughout the recording. Guitar is the main comping instrument with light synth background on several tracks. Guitar is the only comping instrument on one track, while piano is used instead of guitar on two tracks. The opening track omits a comping instrument altogether by using only bass, drums, trombone and tenor sax. The blend achieved with valve trombone, guitar, and synth is striking and especially pleasing on Keith Jarrett's Survivor's Suite (one of only two cuts not composed by one of the musicians or Fahn's wife, bassist Mary Ann McSweeney). The improvised counterpoint between Fahn and guitarist Steve Cardenas on this tune is reminiscent of the musical interplay demonstrated by Bill Evans and Scott LaFaro in their seminal trio recordings with Paul Motian in the early 1960's.

For the slide trombone purists who still have not bought into the idea of the valve trombone as a viable instrument after four sensational tracks, the "real" trombone slides into the mix briefly on The Burren. Fahn overdubs four parts of a beautiful trombone chorale using slide trombones for the introduction and coda to a lush ballad (with the solo part in the middle performed on valve trombone).

Stylistically the other cuts range from the funky Get Sparky, to the straight-eighth ballad Without Changes, to the title track which features an up-tempo introduction followed by a half-time interlude and solos that include both time feels. Mike Fahn's creativity as a musician, composer, and arranger make this a unique addition to one's CD collection. Serious trombonists have too many slide trombone CD's anyway. Why not start your valve trombone CD collection with this one? All you have to do is close your eyes and listen!

You can learn how to purchase Close Your Eyes...and Listen from Mike Fahn's web site, available at www.mikefahn.com/music.