Return of the Alto: A Review 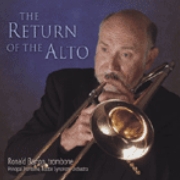 Upon the first hearing of this CD I was initially struck by the wide range of stylized and varied material. Mr. Baron in his usual fashion demonstrates exceptional technique and near flawless intonation throughout this disc.

The Palmetto Suite by Eric Ewazen (world premier) was commissioned specifically for this recording and is in my opinion a compositional gem and a rare treat for all alto officianados. The Palmetto Suite is conventional in its Ewazenesque rhythmic impetus and characteristically joyous sonority. Ewazen's inspiration for this work resulted from a trip to South Carolina's coastal region of Charleston where a walk by the seashore and the "gracefulness and charm of the coast's dunes, historical architecture and its spectacular flora (Palmetto)" inspired this compositional gem.

Mr. Barron impressed me with his command of the lower register of the alto particularly in the final two movements of the Hannes Meyer Sonata in C-minor on Themes of G.B. Pergolesi, performed here with organist Peter Sykes. The C-minor Sonata is nothing short of gorgeous and will be frequently programmed following the distribution of this disc. I look forward to this work becoming more of a staple to our alto trombone repertoire.

It is now and again quite refreshing to hear a newly recorded work from the pillars of our quartet repertoire as is the Hornoff Suite for Four Trombones. I marveled at the ensemble approach and consummate phrasing that can be achieved by none other than the Boston Symphony Trombone section. The ensemble exhibited masterful phrasing and identical note lengths throughout, however I was surprised by the less spatial and "studio" sounding quality of this particular work which seemed a departure from the more organic and acoustical quality of the solo works. Seemingly transparent from the texture was the typical richness and depth of Mr. Doug Yeo, but, in that this is an "alto" disc, perhaps we can excuse this phenomenon. This will be a valuable edition to our Hornoff listening library which for all practical purposes is virtually non existent.

Sky Dreams, a truly collaborative effort by the icons of the BSO and composed specifically for this disc, brings a profound and modern element to this project. Norman Bolter stretches our imagination, renews our soul with a sense of destiny and perhaps order in this world of ours with this eclectic yet original composition. One can appreciate Mr. Bolter's vision and depth as we explore a sunset in late August in all of its glory, color, mystery and revelation. The opening statement of the work is solid. One gets a sense of the epic nature of this scene with this bold and thematic opening. As is the nature of a sunset, the mysterious element of this composition begins to unfold with gradually more contemplative, haunting and distant chants which begin to emerge with muted statements (con sordino) in the alto. As the night time constellation begins to emerge, the occasional shooting star, as echoed by muted glissandi juxtaposed to this haunting melody, might be discerned. The question of transcendence and how one fits into this grand design is demonstrated in this recording by the use of an alto harmmon mute or some hybrid version thereof. The work may be interpreted as ending in the form of a question or perhaps the peace that one might find in being comfortable without feeling the need for an answer.

In direct contrast to the almost supernatural Sky Dreams comes the funny and light tango that is found throughout the Suite for Alto Trombone and String Quartet by Corrado Saglietti. Even the principal horn from RAI National Symphony, Sagliette himself can appreciate the significance and influence of Tommy Dorsey as quoted in the alto at the conclusion of this delightful comedic work.

Samuel Adler's setting of Leopold Mozart's Serenade in D for Wind Ensemble and Alto Trombone brings yet another element of variety to this project. The original nine movement work, opens with what was originally the fifth movement (trumpet) and follows sequentially through the eighth movement for purposes of balance and form. Ronald Barron's artistry and style are simply exquisite in the Adagio.

The ornamentation and crisp articulation found in the Allegro stand alone and in my opinion should be reason enough for everyone to rush out and purchase this disc for their listening library. The cadenza in this movement offers special insight into the color, core and charisma of Ronald Barron's alto playing.

The resonance and excellent acoustical engineering that places one firmly against the back of his chair are evident by this superb final track. Bravo! After hearing the power and glory of this all too brief Prelude from Te Deum by Charpentier, you may find yourself scrambling to locate your alto and the nearest cathedral and organist!

More information can be found at Ronald Barron's website.