A Matter of Time: A Review 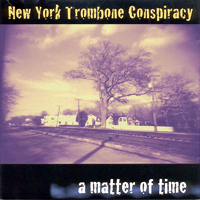 What is it about trombonists and their need to record with other trombonists? As a trombonist I have a fascination with trombone ensemble albums, I can't seem to get enough of these. Other musicians that I know on other instruments seem to be able to ignore the pull towards albums with multiples of the same instruments. Rarely do you see "World of Saxophones" or "The World of Bass" but for some reason trombonists love it. And I am glad. I am also glad that A Matter Of Time recorded by the "New York Trombone Conspiracy" enters the rich collection of trombone ensemble albums. While this album is not a new addition to trombone albums (it was recorded in early 1997) it still sounds as new and interesting as if recorded today. A fantastic collection of original compositions from all the members in addition to four tastefully arranged standards, including a beautiful version of My Ship, an unbelievable Giant Steps delivered by Steve Armour, Monk's I Mean You and an appropriate You'll Never Walk Alone as the album closer.

The album opens with a burning Steve Armour original titled A Matter Of Time with solos by Armour and Pete McGuinness. Both soloists provide fiery virtuosic interpretations urging the listener to want to hear more from this ensemble. Not to be out done, the superb rhythm section of Joel Weiskopf - piano, Tony Scherr - bass and Scott Neumann - drums, provide ample support and help drive the solos and ensemble sections. Final Collection by Jeff Nelson highlights the ensembles blend and musicality with a rich chordal opening soon followed by a contemporary swing feel that leads to solos by lead trombonist Eidam, pianist Weiskopf and bass trombonist Nelson. The Pastures Of Heaven by Armour is the albums first ballad with an opening on alto trombone by Eidem. The melody is relaxed with muted trombone support, a delicate and sensitive interpretation by all. Armour shines with stunning technique and beautiful arching melodic lines. Lofty by McGuinness is a uptempo straight eighth latin groove with solos by McGuinness and Nelson. Both rise to the challenge of the tempo followed by Weiskopf on piano and Neumann on drums. The song closes with interplay between the horns and the drums with a challenging trombone soli.

Cellar By Flashlight by McGuinness is an interesting play on Stella By Starlight. Cellar By Flashlight opens with a trombone soli with drums accenting with brushes. Hints of Stella pervade the melody while still retaining its own identity. Both McGuinness and Eidem (muted) are at home with these changes and provide the listener with confident musical statements. Neumann closes with a brush solo. My Ship arr. by McGuinness is without rhythm section and really highlights the artistic playing of these four trombonists. The beautiful blend of the four different tones is evident. What also comes across is that they play like a band, this does not sound like a one time afternoon session. Giant Steps arr. by Armour opens with Armour and drummer Neumann. If there were any doubts about the technical yet musical potential of the trombone this selection ends the discussion. Armour can only be described as brilliant. Worth The Wait by Eidem is a straight eighth composition with his best solo of the album. A relaxed offering, Worth The Wait also provides solo space for Weiskopf, highlighting the interplay of this superb rhythm section. I Mean You arr. by Nelson begins with McGuinness and Eidem trading back and forth on cup mute and plunger respectively. Playing off each others ideas, McGuinness and Eidem set the stage of this quirky interpretation of a Monk classic. Bassist Tony Scherr closes out the solo section followed by a trombone soli. You'll Never Walk Alone arr. by Armour is a dark yet calming interpretation of the melody leaving the listener with the desire to hear the album again.

A very worthy offering by the Trombone Conspiracy. An excellently recorded and written album, these four trombonists will be continuing to make an impact on the world of jazz trombonists and jazz music for many years to come.