The Lexingport Project: A Review 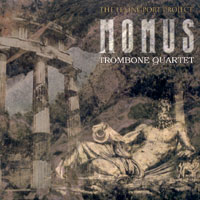 Quick! Name one trombone quartet that has produced a high quality CD while still undergraduates?

If you couldn't think of a single example, then you really need to hear the Momus Trombone Quartet. Four undergraduates from the University of Kentucky and Kingsport, Tennessee, also known as The University of Kentucky Trombone Quartet have just released their first CD entitled "The Lexingport Project". Lexingport comes from merging the group's origin, an example of youthful humor that seems to carry through this delightfully fresh CD. In fact, the group name comes from the Greek god Momus, inspirer of writers and poets, the god of laughter, mockery and ridicule. Momus members are anything but normal undergraduates. There is some special talent here. Seth Vatt was one of 10 students awarded a Research and Creativity Grant from the University, which was the beginning of funding for the CD. Both Brad Kerns and Lee Allen were Eastern Trombone Workshop solo finalists in 2002. Recorded in May of 2002, the Momus Quartet gives us a peek at an up and coming new generation of players, ones who "don't have to be Joe Alessi" to make an impressive CD. Mixing new pieces with classical, straight styling with contemporary, the Momus Quartet pushes the bounds in a convincing manner.

The Momus Quartet front-loads this CD with the amiable Kazik 3 Movements for 4. I particularly liked the Minute March, punchy and humorously played. Not willing to take the easy road, the group takes on the powerful and beautiful Adagio from Bruckner's 7th Symphony, arranged by Jay Friedman. Soft and delicate when needed, strong and solid, these guys have put together a memorable performance of the piece. I am sure Anton would have liked it. In a show of technical daring-do, the Quartet tackles the Toccata and Fugue in D minor by Bach, arranged by A.P. Taylor. I have compared their performance side-by-side to that of other recorded trombone quartets and in my opinion, the Momus Quartet's version really nails the intonation and rises above the others.

Just for fun, the Momus Quartet shows their age by including a tune from an icon from their generation arranged by the group, Koji Kondo's Super Mario Brothers. Then as if to show their depth and complexity, they perform the Christian rock writer Steve Green's A Chasing of the Wind.

After several listenings, which included comparisons to other commercially available trombone quartet CDs, I have come away with several compelling thoughts. First, making their own CD was a huge project for these young players to take on. That they did it, and did it so convincingly well is a great tribute to their talent not only as players, but as ambitious young men. Secondly, this CD is fun to listen to and will give you a good feeling about the nature, vision and strength of players in this new generation.

This is a splendid debut CD and I hope there will be more to come from Momus. Do yourself a favor and order a copy today. Hear what American youth sounds like at the beginning of the 21st Century. You won't be disappointed.