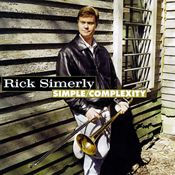 Simple/Complexity -- Rick Simerly's new CD release -- is a straight ahead recording. Not in the sense of a Basie straight ahead, but in the sense of a straight ahead small group jazz. All of the players on this recording are seasoned, accomplished musicians. As a trombonist, Rick Simerly is in the upper ranks of contemporary jazz trombonists. He knows the changes -- check out his take on Coltrane's Giant Steps. He knows how to swing, and so does his band! His writing is right on for this style -- Simerly's The Pitch Approximator is one of the best charts on the CD (with the best playing, too). Simerly has all of the technique, sound, and range of a Bill Watrous.

Any criticisms of this recording is simply a matter of one person's taste preferring certain other approaches. For example, none of the players take any "hard left turns" on the recording. Playing outside is often approached or even alluded to, but never fully explored in the solos. Another example is Giant Steps; while technically perfect, it lacks the seamlessness of Coltrane (but then who CAN recreate that!?) I would have also enjoyed a wider variety of colors in Simerly's sound and style -- he might have incorporated some plunger work, for example. Simerly might also consider allowing more space in his solos; he should let the silence play a part of his artistry, too. Simerly might also play in a wider range of dynamics and out of the upper register more often. I appreciate the risks that an artist like Ray Anderson takes, but that says more about my personal tastes and preferences than it does this particular recording.

One final note on the recording itself. The mix is often trombone heavy and therefore slightly out of balance. It also sometimes sounds like the players were in separate rooms for the recording -- the drums have a particular "far away" sound.

Despite my nit-picking, I would recommend this recording for any trombonist. It provides an example of very strong trombone playing. As an educational recording, it introduces students to some of the staples of the art form and may inspire students to seek out the original recordings by some of the giants in jazz like Wayne Shorter and Coltrane.