Cadenza for David's Concertino by Werner Michel: A Review 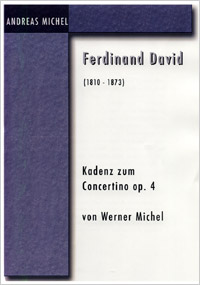 Cadenza from the David Concertino for trombone and orchestra, Opus 4, by Werner Michel. Published in 2001 by Spaeth-Schmid Blechblasernoten, Lise-Meitner - Str. 9, D-72202 Nagold. http://www.spaeth-schmid.de

My Schirmer's Pocket Manual of Musical Terms defines a cadenza as "An elaborate passage or fantasia at the end of the first or last movement of a concerto, and played by the solo instrument." There are many examples of written-out cadenzi that are always performed with certain concerti, but in years past, soloists often worked out their own, sometimes improvising them on the spot, sometimes working them out beforehand. The most successful cadenzi use thematic material from the concerto as a framework for showcasing the virtuosity and musicality of the soloist.

This cadenza was written in 1938 by Werner Michel (then only in his late teens!), who was a trombonist in various German orchestras. It is written to be inserted in between the 1st and 2nd movements of the David Concertino. The range of the cadenza goes from a pedal Bb up to a high Db, and is written in bass clef throughout. As is the nature of most cadenzi, it is written without barlines, so that accidentals are only in effect for the notes they are attached to. The printing is very clear and laid out nicely over 2 pages. The last page is a reproduction of the original handwritten notation. Herr Michel utilizes themes from the 1st movement as the foundation for his virtuosic display, with wide leaps, triplet rhythms, diminished arpeggios, and lip trills as the seasoning. An F attachment is only necessary for one low D, which could probably be omitted, but having a F attachment will make some material easier to perform fluidly.

Werner Michel's Cadenza is a worthy addition for anyone performing the Concertino. If anyone is interested in making up their own cadenza (for any concerto), it will also serve as a fine example of how it should be done.