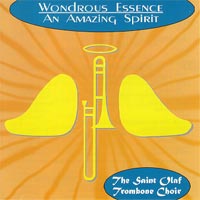 Saint Olaf, founded in 1874, is a liberal arts college located in Northfield, Minnesota. The music department consists of vocal and instrumental groups, including the St. Olaf Choir, the St. Olaf Band and the St. Olaf Orchestra. It is assumed that the trombone choir is made up from members of the instrumental groups and that this CD of the 1997-1998 trombone choir is the premier recording of this ensemble, but the information in the CD cover is vague and the website does not lend further insight. One of the joys of receiving a new recording is to read about the performers, composers, and arrangers. Unfortunately there is little offered here besides a couple of pictures and a listing of compositions.

The title and cover of this album would suggest that the music enclosed consists of sacred compositions, which would lend itself to a church setting. Most of it does, yet there are also selections like Pseudo Blues by Bill Himes and Little Brown Jug that seem rather out of place in this realm. The recording opens with full choir playing a wonderful work, Concertante Antiphonale by David Uber followed by a nice student arrangement of Amazing Grace. These pieces, like much of the CD, suffer from inconsistent articulations, intonation problems and forced dynamics. Everything seems much too heavy and the overall tone of the group is tubby. The recording quality is good but some selections sound distant while others push the recording levels to the limit. Slide clicking and coughs are also abundant throughout.

There are improvements in later selections as performed by some of the smaller ensembles. The Ave Maria (Angelus Domini) arranged by Ralph Lumpkin and Collage by David Uber are well executed and convey the intended emotion with minimal problems. On the final selection, Five Antiphons by Charles Forsberg, the trombone choir is accompanied by Andrew Peters on organ. This is a nice change of color but is hampered by intonation problems, especially in the unison trombone parts.

Conductor Paul Niemisto, who has been on the Music Faculty at Saint Olaf since 1978, does an excellent job choosing music that is well within the technical capabilities of his students. His duties at Saint Olaf include teaching trombone, euphonium, tuba, music education courses and conducting the Norseman Band. The undertaking of recording a CD of trombone students is a terrific idea that undoubtedly is an invaluable learning experience for all involved. The production responsibilities appear to be handled solely by the students. Projects like this should be part of every major music education curriculum and Mr. Niemisto needs to be commended on his initiative.