The Island of Dr. Trombone: A Review 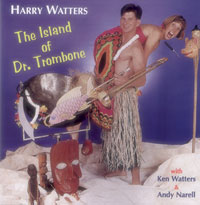 This CD consists of a collection of what I would describe as easy-listening jazz numbers with a tropical feel, featuring Harry Watters, jazz trombonist with the Army Blues. The mood is generally light-hearted. Dr. Trombone's island is apparently inhabited by various interesting sea creatures, dusky maidens, and James Bond villains which crop up at various points in the music.

Some jazz fanatics might find all this irritating and may even wonder why the recording was made at all. However, Harry Watters informs me that "recording the disc was a therapeutic way of getting through the harshest weeks of sub-freezing temperatures" which he faces as an inhabitant of Washington D.C.. On a more personal level, the music represents a nostalgic trip back to his childhood in the Virgin Islands and is a tribute to his recently-deceased father, whose work for NASA took Watters and his family to tropical climes.

This reviewer enjoyed Watters's trombone playing very much. Watters has a fantastic upper register and the ability to bring off effortless, controlled, sustained and stratospheric lip trills. A good example of this can be found in the title track, The Island of Dr. Trombone. His slide technique and rapid tonguing are similarly impressive and call to mind the great Bill Watrous - although Watters's sound, while still excellent, is not quite so full and broad. The melodies on this disc are well-suited to the idiom of the trombone, and Watters has many good opportunities to show off his superb legato playing. Watters is ably supported by several fine musicians on this recording, most notably his brother Ken on trumpet, his wife Claire on piccolo, and Andy Narell on steel pans.

I have one or two minor criticisms. The trombone sounds slightly distant on this disc. This is rather frustrating at times, as Watters's playing is extremely fine and deserves to be highlighted as much as possible. Also, while the juxtaposition of trombone and steel pans is initially interesting, I found that it palled for me fairly quickly. Nevertheless, this recording represents a major achievement for Harry Watters. I am certain that the trombone world will be hearing much more from him.

Sound clips and ordering information can be found at: http://www.harrywatters.com.