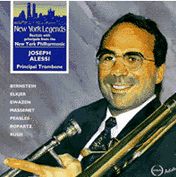 Few of us have not heard Joe Alessi previously, whether in live performance, masterclass, or recording, so no one will be surprised to learn that all performances on this recording are absolutely first rate. Alessi's warm, compact sound and easy flexibility allow him to cruise through even the most demanding of these works seemingly without difficulty, and the level of musicianship is naturally first class.

According to Cala records Artistic Director, Geoffrey Simon, the selection of music was left to the performers on these recordings, and, while all periods and styles are represented, the majority of music is by American composers and of recent vintage. Such is certainly the case with this album. Mr. Alessi has chosen a varied, dynamic program including a good amount of music new to this reviewer.

For my money, the most interesting piece on the CD is Arrows of Time,by Richard Peaslee. Peaslee studied at Yale and Juilliard as well as privately with Nadia Boulanger and William Russo (trombonist/composer/arranger with Stan Kenton Orchestra). He has composed extensively for the stage, film, and television as well as for the symphonic and big band media. Arrows of Time is in three movements. The outer two movements are heavily jazz-influenced and provide an excellent showcase for Alessi's virtuosic capabilities, while the middle movement is warm, lyrical, and beautifully singing. Peaslee states in the liner notes that he conferred with both Alessi and Jim Pugh in the process of composing this piece. I have no doubt that this was a wise course of action because the musical and trombonistic results are extraordinary.

Equally exciting are relatively new pieces by composers Stephen Rush and Eric Ewazen. Interestingly enough, Rush's and Ewazen's backgrounds are remarkably similar. Both were trained at the Eastman School of Music and studied with Samuel Adler, Warren Benson, and Gunther Schuller. Their music, however, is anything but similar. Ewazen has hewn to a more classical approach to composition, while Rush's is more spiritual and intuitive, influenced, no doubt, by the year he spent studying music and dance in India on a Kellogg grant. Ewazen's Sonata by his own description, relies on traditional procedures of musical development for its shape, the first movement being a true sonata-allegro and the third an exciting rondo. Rush's piece, Rebellion, for trombone, piano, and percussion is a wild tour-de-force employing Ghanaian drumming and extra-musical effects in an intense musical outburst of emotion.

Also in his package, Alessi includes a stylistically attractive rendition of Bernstein's Elegy for Mippy II, a beautiful reading of Massenet's Meditation from Thais, and an exciting version of the Concert Pieceby Guy Ropartz (by the way, he has no problem with the ending!). For the grand finale, Alessi joins forces with an extremely solid group of New York trombonists in an outstanding arrangement of J.J. Johnson improvisations on Old Devil Moon, Yesteryears, and Love for Sale.

One quibble with the overall packaging of the album is the inclusion of Bernstein's Waltz for Mippy III for tuba and piano, played by Warren Deck. It is certainly a great performance, but seems anomalous included on this album where there is nothing else to showcase Mr. Deck's fine playing. Cala Records would be far better served giving him his own recording!

This is a great album, buy it.