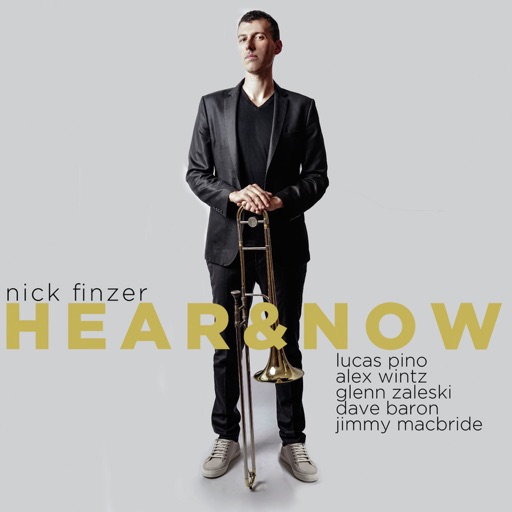 Hear and Now showcases Nick Finzer's blazing technique as a virtuosic trombonist right out of the gate with the burner We the People, evoking flashbacks of Art Blakey's fiery rhythm sections of years gone by. More than just a bon ton of chops, Hear and Now also highlights Finzer's acuity as an inventive composer and arranger.

Eight of the nine tracks are Finzer originals, with the lone cover consisting of a brilliant version of Duke Ellington's Single Petal of a Rose. The track opens with a pensive solo trombone with plunger reminiscent of the great Joe "Tricky Sam" Nanton. Nick ably accompanies himself with an overdubbed trombone choir joined by Lucas Pino on bass clarinet. Wait, bass clarinet on a jazz trombone CD? That's enough to send even the most adventurous listeners scurrying for cover, or at least to their J & K collection to clear their aural palette! However, there is no need for alarm. Finzer's able pen as an arranger explores the broad spectrum of colors provided by the bass clarinet to great advantage. Like the Reese's Peanut Butter Cups commercials of old, Finzer's trombone and Pino's bass clarinet are "two great sounds that sound great together!" Pino's tenor saxophone skills are world class, but his doubling skills really shine on the hauntingly beautiful New Beginnings, one of several tracks featuring the oversized licorice stick.

Hear and Now has something for everyone. Trombone readers secretly aspiring to play in a rock and roll band may enjoy the guitar distortion on The Silent One. Enjoy an understated, wistful jazz waltz? Check out Lullaby for an Old Friend. Perhaps the liner notes capture the various moods of this album best: "Hear and Now is Presence, Vision, Passion, Inspiration, Reflection, Dialogue, Evolution, Action, Change."

The use of both guitar and piano in the rhythm section provides a full sound behind the horns, with Alex Wintz occasionally joining Finzer and Pino on inimitable melodic lines such as on Race to the Bottom which clocks in at quarter=350+. It's difficult to determine who wins the race with such a fine cast of characters. Speaking of which, be sure to check out Nick Finzer's 2019 release on the Outside in Music label entitled Cast of Characters! It featuring the same cast of characters as on Hear and Now. You won't be disappointed!

Sound clips and purchasing information for Hear and Now can be found at Album Link.