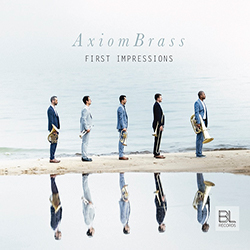 Trust me when I say that it is impossible to understate the importance of making a positive first impression. Speaking from experience, an immediate misstep can put you in a hole that takes a lot of time to get out of. Thankfully, Axiom Brass' new album, First Impressions, does not have to worry about that.

First Impressions earns its title by consisting entirely of newly commissioned music by Axiom Brass. These musicians decided to commemorate their 10th anniversary by continuing to expand the library of music for chamber brass, illustrating their dedication as both quality musicians and advocates for the significance of this relatively young ensemble setting. While this is not my first experience listening to Axiom Brass (their recording of Ewazen's "Frost Fire" is a personal favorite), I must admit that it was my first time hearing music by any of the composers. Now, thanks to this album, I have some homework to do. Each piece in First Impressions is highly programmatic in nature and paints a vivid picture, from the sincere anguish and anger in David Faleris' "A Martyred Village" to the various winged personalities in Augusta Read Thomas' "Avian Capriccio."

What truly elevates this material is the expert musicianship of the ensemble. The variety of tone colors throughout the album is staggering. The opening notes of the album, played on trombone by Corey Sansolo, immediately captivated me and informed me that this was going to be an emotional experience. As a trumpet player, I was constantly in awe of the precision of Dorival Puccini and Michael Hawes, especially in the demanding ending of Thomas' first movement. The level of subtlety Kevin Harrison reaches on tuba is consistently impressive, particularly in his control at the end of Ben Hjertmann's "From the Morning." Matthew Bronstein on horn showcases the versatility of his instrument throughout, from the mysterious opening to the second movement of Liduino Pitombeira's "Axiom" to the melodramatic beginning of the second movement in Matt Ulery's "IDA." While there are various mutes throughout the album to assist in the various tone colors, it is clear that each player is capable of expressing different emotions without the use of additional hardware.

The level of difficulty of performing the music of First Impressions cannot be emphasized enough. Playing chamber music is as physically and mentally taxing as performing solo repertoire. Additionally, chamber music has always offered a challenging aspect not found in large ensembles: the necessity of chemistry between musicians. While the standards of brass quintet repertoire typically offer a sense of rhythm easy to identify (think any of the Ewald quintets or Renaissance transcriptions), much of the music here has a freer structure. Music of this variety requires each individual in the ensemble to know each other's music inside and out, and Axiom Brass does a truly impressive job in this department, illustrating the level of trust these musicians have developed over their decade of existence. That's not to say that there isn't any pulsating music in this album - just listen to the classic brass quintet style of the final movement in "Axiom" for proof of danceable material!

It is very difficult for me to choose a favorite recording for this album. Every piece brings something different to the table (proof of quality programming). The painful beauty of "A Martyred Village" is equally as compelling as the playful nature of the opening movement to "Avian Capriccio." However, the movement I keep going back to for repeat listening is the 4th movement of "ICA," titled "Wicker Party." There are layers of enjoyment here, from the independent beauty of each musician's articulation and dynamic contrast to the way each part interacts and creates a unified sound.

Overall, I am very impressed by this album. I believe that there's something here for all musicians, brass and otherwise. As a fan of programmatic music, I found myself imagining the various images portrayed throughout the album, constantly wowed by how the music could create such detail. It is important to expand one's musical palate with new works and composers, and this album is a beautiful representation of music in the 21st century. If brass quintet music is something you seek out, especially new brass quintet music, Axiom Brass' new release is a must-have. If you are unfamiliar with Axiom Brass, do yourself a favor: pick this CD up, find an hour of distraction-free time, and listen to this album in its entirety. I am confident that First Impressions will make a great...well, you know.

Sound clips and more information about the composers and pieces can be found at the Axiom Brass web site.