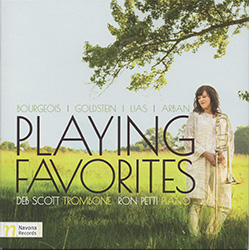 Dr. Deb Scott and Dr. Ron Petti are colleagues at Stephen F. Austin State University in Nacogdoches, Texas, and from the first notes of this recording, the listener immediately realizes they have a wonderful performing chemistry. The interaction between the musicians is stellar, with each performer clearly communicating each nuance of the music. Both artists show outstanding technique and command of their respective instruments.

The repertoire chosen for this recording offers a fine mix of old and new, with my personal favorite selection being the opening work, Derek Bourgeois' Concerto for Trombone. Bourgeois' harmonic palette is a wonderful choice for these two performers, highlighting the impeccable technique of Petti and Scott's focused, well-centered tone. The three movements showcase her ability to move from bombastic to lyrical, and the performance is top-notch.

Goldstein's Colloquy is an aggressive work with significant demands upon the soloist, including extremes range, articulation, and phrasing. The difficulty of this piece lies in extended passages of double tonguing, with the passages rhythmically doubled in the piano requiring the utmost in precision from both artists. Scott and Petti deliver a well-crafted performance.

The only challenge I had with this CD is with the recording itself, not the performance. There are several places where I believe the microphone was placed far too close to the bell of the trombone, which resulted in a muffled, unfocused sound. From personal experience, the trombone is one of the more challenging instruments to reproduce in recordings, and I would highly encourage listeners to overlook these minor issues in recording technology.

The second multi-movement work on the CD is Stephen Lias' River Runner, a three-movement work depicting the composers impressions of landmarks from a kayaking trip in the Big Bend National Park This is a great addition to the solo repertoire for trombone and is fast becoming a staple of the recital stage. This is the best performance on the CD and is both an outstanding recording of a somewhat new piece and an excellent reference recording for musicians learning the work. Scott adeptly navigates the rhythmically and stylistically challenging first movement, moving from aggressive to a lush, lyrical sound to highlight the changing textures. Her muted work in the second movement is a highlight of the CD, as she creates a mysterious, somber atmosphere with marvelous subtlety. The pointillistic nature of the third movement again highlights the wonderful collaborative spirit of both performers. Overall, a spectacular performance.

The last work on the CD, Arban's warhorse Variations on "The Carnival of Venice," is an acrobatic showcase for any brass player, and Scott's technique shines through. Her clarity of articulation, well-planned phrasing, and agile performance of music originally written for a valved instrument makes this an impeccable choice to conclude a wonderful compact disc.

This would be a great addition to any trombonist's library. The repertoire is outstanding and the performances fiery and inspired.