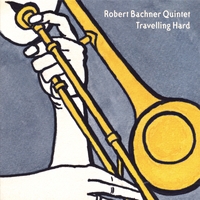 As a musician in New York City, I've been exposed to many different genres of performance. The elements of these performances that keeps me in my seat are a cohesive group sound and dynamic interaction, rather than technical displays. This is the level on which you will find the Robert Bachner Quintet; five highly sensitive, well-versed musicians putting the music first.

And what music it is. Bachner's compositional style shows a strong influence from Wayne Shorter and Herbie Hancock, and presents thoughtful and memorable melodies supported by deft harmonic structures. The group navigates the various style and meter changes with ease, as evidenced by the enchanting waltz "Standard of Reference" and the 7/4 groove "From 4 And To 2 And". It is the latter where Bachner delivers his finest playing of the album, showcasing his robust sound with monstrous lines, a soulful delivery, and owning the odd-meter. With his bold, "take no prisoners" improvisational approach, Bachner can sound frantic at times, functioning as a contextual foil to the broad landscapes elicited by his more mellow songs and his tasteful pianist, Reinhard Micko.

Bachner hand the solos out warmly, giving everyone plenty of space to play. Of special note is saxophonist Maurer's solo on the Maiden Voyage-esque "Backup", where he impresses with his powerful lines and hip phrasing. Bachner crafts a beautifully understated solo on the pensive ballad, "Public Secret", which also contains some nice brushwork by drummer Christian Salfellner.

While the content of this album is more than enough reason for a listen, I must add that this project is among the most well-recorded and mixed contemporary small groups that I have heard. Bachner and Maurer achieve a compelling blend with excellent intonation. One must remember Bachner when considering a producer for acoustic jazz.

Traveling Hard is trombonist Robert Bachner's second album with this quintet, and it has received the Austrian Music Office's Hans Koller Prize of 2006 as CD of the Year. This recording would make a fine addition to your cd collection, and serves as a firm reminder that jazz music is alive and well in Austria. Visit Robert Bachner on the web at www.robertbachner.com.