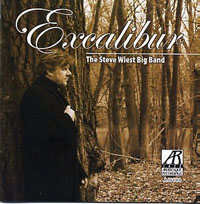 Trombone insiders have known Steve Wiest since his six-year stint with Maynard Ferguson during the 1980s. The jazz ed community recognizes him as a sought-after clinician and the Director of Jazz Studies at the University of Wisconsin-Whitewater. And now the wider jazz audience has the chance to get acquainted with this gifted trombonist-composer-arranger through this exciting new big band release.

The program opens with that wonderful Irving Berlin chestnut, Cheek to Cheek, cleverly reharmonized by Wiest over a shuffle beat that would have made Fred Astaire lace up his dancing shoes. Wiest's free-blowing improvisation showcases his impressive chops and vast imagination, and bassist Bob Bowman solos over the ensemble, before Wiest returns to bring this rich, diverse chart to a soaring conclusion.

Excalibur, the first of five Wiest originals, tells an heroic musical tale, a sort of "Camelot with soul" (or in this version, "Camelot con alma"). A foreboding martial undertone is established by Bob Rummage's drums and some heraldic brass fanfares. But this dark mood is juxtaposed with a bright, intricate, Gillespie-inspired theme, introduced by Wiest's trombone and the soprano saxophone of Randy Hamm, who contributes a chapter or two of his own. Like the Arthurian legend that inspired it, this is a story with a beginning, a middle, and an ending, an aural fable in which you can lose yourself again and again.

The "groove" in Wiest's The Once and Future Groove refers to that unforgettable combination of sound and feeling invented by the one and only Count Basie. Of course, the Li'l Ol' Groovemaker had a most able assistant in his labors, his stalwart rhythm guitarist Freddie Green, whose role is filed impeccably here by Mike Standal. Soloists Glenn Kostur, on baritone saxophone, and Wiest step out of the ensemble, which is powered from beginning to end by longtime Basie Orchestra lead trumpeter Mike Williams. Besides honoring Basie, Wiest's chart cleverly pays tribute to Bob Mintzer and recalls almost all of Thad Jones.

Wiest paints Cole Porter's I Concentrate on You in soft pastel colors - reeds, flugelhorns, trombones in bucket mutes - with his muted 'bone blowing over a gentle rumba beat. It's an ambitious and intelligent treatment, eleven minutes long, but never at a loss for engaging twists and turns. Cerulean 12, as the title implies, is an original twelve-bar blues, and even more, it's composed on a twelve-tone row. Wiest opens the piece with four choruses in a deep indigo hue. After the band states the serial-based melody, trumpeter Mike Plog offers a solo marked by subtle note choices and a relaxed time-feel, and then alto saxophonist Tim Ishii takes over and defines "cool."

Another Wiest original, The Silver Spin, features his ballad artistry as well as his penchant for tuneful ensemble voice-leading. He returns to a storytelling mode with A Night in Pidruid, an intrepid outing for Ed Peterson's freewheeling tenor saxophone and Wiest's adventurous trombone. Following a map drawn by late Rich Matteson, Wiest locates On Green Dolphin Street between the musical "avenues" (that is to say, key centers) of C and Eb. Wiest's climactic, largely unaccompanied, solo shows that he has found a comfortable home at this address.

Inventive new big band CDs are rare. Important new jazz trombone CDs are even rarer. And so, Excalibur by the Steve Wiest Big Band is a double treat. Each track is like a bold journey into uncharted territory, exploring lands previously unknown, but ultimately inviting and friendly.

More information and sound slips are available at Arabasque Records.