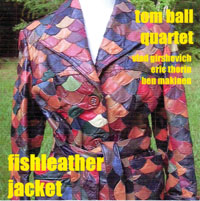 One aspect of jazz that often lacks the genre's requisite creativity is instrumentation. Trumpet, sax, trombone, piano, bass, drums, and guitar seem to have the jazz world's instrumental preferences locked up. A euphonium is rarely seen even in the depths of a large jazz ensemble, much less out in front of a quartet. This is only one of the reasons that jazz euphoniumist Tom Ball's independently released Fishleather Jacket is so fresh and rewarding.

Fishleather Jacket is a very accessible, fairly straight ahead jazz quartet record. The eight original compositions range from latin grooves, to hard swingers, and include a jazz waltz and a ballad. None of the tunes exceed six minutes in length. Ball's euphonium sound is crisp and clear, and the valves no doubt are a factor in his exceedingly smooth and uniform articulations. The band swings hard, and the latin grooves feel good. All four musicians show exemplary skill and taste, and pianist Vlad Girshevich really shines. The recording quality is excellent.

Several performances stand out. Exit 183 is a New York style modern tune with a vibe very reminiscent of Don Grolnick. The group seems to stretch a little more on this one than on anything else on the CD. The title cut features a Cuban style percussion section, although only Ben Makinen is listed as a percussionist in the liner notes. If he overdubbed these parts he did a fabulous job of creating a coherent groove throughout. Peter Rabbit is a jazz waltz in the Bill Evans vein. Eric Thorin (bass) and Ball both play very tasteful solos before giving way to Girshevich who is really starting to cook when the theme returns.

If you have ever harbored doubts about the viability of the euphonium as a mainstream jazz instrument, this CD is the evidence needed to erase those doubts. The well-crafted compositions, excellent musicianship, and superb production combine to make a very enjoyable jazz record...that just happens to feature a euphonium player in the starring role.