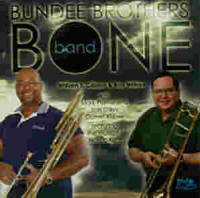 Maybe I'm just a cynical person, but the very first thing I noticed when I received this CD was the prominence of the Edwards logos on the front photo (on both of Gibson's and Wilkin's barrel chests). Okay, Edwards trombones are excellent instruments, and I can handle a little bit of commercialism. But upon opening the case and looking at the liner notes (something I always do when I first listen to a CD) my jaw dropped. There stands William E. Gibson next to his impressive bio pointing to his Edwards' monographed counterweight. Excellent instruments or no, Edwards actually comes off looking a little bad with this bit of tasteless humor.

The music itself is entertaining, as long as you can allow your tongue to remain mostly in your cheek. Again, first impressions being golden, I had high hopes for the first track, the Gibson-penned blues "Groovin' With Griego." Unfortunately, it is probably the least effective of all of the tracks, with Ron Wilkins handling the fast pace noticeably better than his counterpart. I understand the choice of the first tune in terms of its "throwing down the gauntlet" appeal - Gibson's first note is in the stratosphere and Wilkins' first on the bass trombone is in the basement - but they really lose intensity in a lackluster trading of choruses that does not quite do justice to the J.J. and Kai recordings they are emulating. I would have enjoyed the CD much more if the first track had been their fine rendition of "Blue Monk" or Marco Katz's "Casey Dog Blues." All in all the disc could have used a serious re-ordering of material.

Katz's compositions are a real highlight of the disc. His trombone writing is expertly idiomatic, and his music is harmonically interesting without being obtuse. Gibson also contributes a fun, straight-ahead tune based on the changes to "I Got Rhythm" in "A Rolling Stone Gathers No Maass." The other musicians on the set (recorded in two sessions, six months apart) acquit themselves nicely, with the rhythm section laying down easy, swinging grooves for the soloists.

William E. Gibson has an amazing command of his instrument throughout the disc. In my opinion Ron Wilkins actually wins the battle of the bones in most of the tunes, as he utilizes his equally impressive technique and range to a more musical end. If you're looking for the most artistic trombone CD release this year, look elsewhere. But if you're a trombone junkie who would love to hear a couple of the instrument's most powerful and wild players romping through a mosaic of different types of jazz, this is the CD for you.