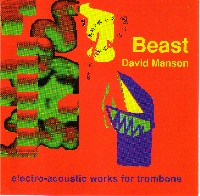 Beast, by trombonist David Manson, presents 5 electro acoustic works; four for live trombone and tape, and one for radung and guitar. Manson presents a very solid and virtuosic performance and all the pieces are crafted by composers comfortable in the mediums they have chosen. When one composes for an acoustic instrument and tape/electronics, the challenge is to create an experience that balances or contrasts the chosen instrument with the sonic canvas. In the case of Beast, the composers and performer are very adept and skillful in their art and have succeeded with the perfect balance.

From the first sounds of the airbrakes and trombone in Mambo Vinko, the listener witnesses the piece coming to life. The pictorial imagery used by composer Javier Alvarez is quite compelling. Mambo Vinko is very much a nod to the referential and formalistic structures within electro/acoustic music. Even Alvarez's use of manipulated and constructed abstract sounds, lend to the narrative structure of the work. Alvarez has succeeded in creating a piece that really doesn't need program notes while the piece doesn't insult the listener by over-presenting the constructed narrative. David Manson is able to present very disjointed phrases as one continuous and almost harmonious thought. Manson has mastered this "beast" (the trombone) quite well and is able to use it here in a very narrative and graphic way.

All Clear Now is an effective piece containing a skillful marriage of real time processed radung and live guitar. The sounds and how they are used in this piece are very unique. Williams and Manson fuse two completely different sounding instruments that meet in a virtual space and has each compliment the others' sonic structure in a very provocative way.

As a composer taking on the concepts of concrete ideas constructed abstractly and abstract ideas constructed concrete, Eric Lyon has succeeded in a way that is very commanding. Confessions of a Virtue Addict is a virtuosic, light but very serious piece that embodies the divergence and contradiction of the late 20th century information overload. The piece is a perfect contradictive conundrum. Manson is able to present a very convincing and cohesive trombone performance. The integration of Japanese noise music and 18th century musical doctrine is very captivating here. Lyon's composition presents many opposing feels, rhythms, sections and styles that are able to coexist in a masterful balance.

RE: DAVID allows David Manson to shine in very creative and virtuosic ways. This piece has a very interesting constructed environment for the performer to explore and be expressive in many different ways. Gustavo Matamoros has given the performer an ON/OFF button in response to changes in amplitude that controls the flow of information emanating from a tape in such a way that the performer has unlimited creative control. In addition to the fascinating technical idea, its application is very successful and powerful.

Freund is a very evocative and heartfelt piece. Reminiscence of Copland in its use of harmonies and construction, this piece builds and creates a beautiful environment that slowly develops into an AudioMulch theme and variations. The sound of the trombone could not be more rich or full. Manson's construction through the computer makes a very profound statement. Freund is simple and beautiful.

Beast is a serious electro-acoustic CD that should be made available in music libraries as quality solo acoustic instrument and tape/computer accompaniment. The technology that is used in the pieces and the virtuosity of the performer do not over shadow the artistic ideas of the individual works. I highly recommend this CD, Beast stands on its own - David Manson has presented the beautiful and intellectual side of the beast.

Beast is available on Spotify.