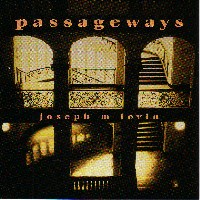 This self-produced collection includes three compositions for brass, two for piano, and two for strings; each depicts a scenario described by the composer in the liner notes. Let's begin with the piece of most immediate interest to this readership. Black Bear Walking, for unaccompanied trombone, is in a more-or-less neoclassical vein. It begins as a horn call piece and evolves into more thoughtful, rhythmically flexible music. A fine, competent work- which could use a different title. The heavy, shambling gait of a real bear is missing; the regal, slightly starchy quality of the first section and the introspection of the second are evocative, but in a human, not ursine, sense.

The other substantial brass piece on the album is the quintet Henry VIII. Appropriately enough, much of it sounds like Renaissance music filtered through contemporary ears. There are a number of compelling moments: powerful, jagged music in the second movement, a captivating contrapuntal web in the third, and a very effective series of modulations in the finale which are unfortunately weakened by an ineffective ending.

Like all of the other "aural dramas" in this collection, Henry VIII is intended as program music. The chief problem this reviewer finds with the album is related to this, in that many of the pieces have a surfacey, somewhat generic quality; the composer's inner thoughts and feelings seem to be keeping a polite distance from the picture being painted.

The biggest exception to that generalization, the title cut, is also the strongest composition on the album. Performed with command and sensitivity by cellist Peter Prosser, it is an eloquent interior monologue which, while originating from a program (a child's reactions to the loss of a parent), goes far beyond setting a scene and is stronger for it. The autumnal soliloquys of the work's outer movements are separated by a sort of brooding march, which is quite exciting and includes a terrific passage in which plucked and bowed phrases trade off in an intense inner dialog. When this composer delves most deeply inside himself, he comes up with the finest pearls. Let's hope that he'll do so increasingly in the future.