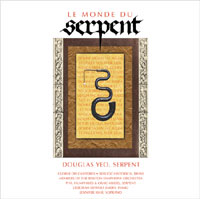 A solo serpent album; are you kidding me?

Don't get me wrong, I am a fan of this musical relic, this grandpa to the tuba. Having played serpent as an undergraduate student, I am familiar with the enormous amount of work needed to make the thing sound acceptable in polite company. It is a high-maintenance relationship that is shared by performer and serpent.

I remember having an odd affinity for this instrument that did not exist between my tuba and myself. I believe that it was a sense of primitivism, simplicity, or an historic depth not found in the world of my primary instrument. Maybe this was due to the fact that the tuba was patented in 1835, but the serpent was invented way back in 1590. Let us revisit this antiquated instrument for a moment.

The distinctive timbre and character of the serpent seemed to have been permanently consigned to obscurity until 1970, when the Englishman Christopher Monk decided to learn to perform seriously on one that he had acquired and restored.

Serpents are so "low tech" that even my modern, school-issued reproduction felt ancient when I practiced or performed on it. Playing it felt like visiting some past time, like hearing a recording of Enrico Caruso and knowing that I was hearing a voice coming from a world long since dead and buried.

Mechanically, there is really nothing to a serpent: two snake-like pieces of carved wood fitted together and covered in a nice leather wrapper, with a long, brass bocal and a trombone-sized ivory mouthpiece. Most have six holes placed in locations having neither acoustical merit nor ergonomic comfort. At some point in the past, serpent builders must have listened to the gripes of contemporary serpentists regarding the instrument's inherent acoustical instability, because many later ones came fitted with from one to six keys that allowed the player to reach out to where the holes ought to have been placed on earlier examples of the instrument.

The serpent has a timbre both familiar and foreign, melding qualities of the bassoon, the human voice, and the tuba. These elements allow for the instrument to blend quite well in many settings. Since the tuba component of the sound is so small and light, it is at home in woodwind-driven Harmoniemusik where the more modern tuba would be inappropriate; the bassoon qualities just add to that blend. And the vocal qualities are somewhat haunting in the serpent's traditional cantus firmus role. As a solo instrument, the serpent will probably never sell out performances at Carnegie Hall, as it can have an airy and unfocused sound on some pitches, as well as pitch and stability issues. Nonetheless, it is a voice worth taking the time to get to know.

Thanks to the industry of Douglas Yeo, Bass Trombonist of the Boston Symphony Orchestra, this instrument can once again be heard, studied, and enjoyed by anyone. After two years of work, Mr. Yeo released Le Monde Du Serpent on October 3, 2003 as disc BHB CD 101 of the Berlioz Historical Brass label. It is an all-encompassing tour of the history, repertoire, and capabilities of this seemingly neanderthal member of our low brass family, and is a musically enjoyable addition to our catalogue of low brass recordings. It will make people reconsider any ideas previously held about the sound and technical capabilities of this instrument.

The album consists of twenty-four tracks ranging from the farcical to the sublime, and all of it featuring the serpent in like-instrument groups and wind ensembles, as a solo voice, or in its original choral role. Also featured in various settings are the contrabass serpent, ophicleide, and buccin (a dragon-headed trombone with a horn-like timbre).

A large number of people were recorded for this collection, including a number of BSO members. The performances are all first rate, especially if you understand how beastly the serpent can treat you if you stop concentrating for even a moment while playing.

Highlights for this reviewer were the Divertimento attributed to Haydn and a serpent concerto composed in 1987. The Haydn is worth the price of the disc all by itself, as it is a delightful piece of music. The serpent sounds very comfortable in the ensemble due to its vaguely bassoon-like timbre, yet gives more depth to the ensemble by virtue of its larger sound. While preparing this review, I found myself returning to these four tracks the most often.

Simon Procter's 1987 Serpent Concerto is a nice work as well, and features a set of cupped bells along with piano for the accompaniment. It is a tough work and very well played. It is this performance that makes me want to pick up the serpent again after so many years. This work is easily the centerpiece of this musical collection.

There are three choral works, a Beethoven symphony movement, solo etudes, a duo, and even a 1998 work for serpent and soprano by Drake Mabry entitled Quatre Tanka. Also, there is a fun little theme with variations piece by Clifford Bevan (1996) entitled Variations on "The Pesky Sarpent" which is quite good. It is preceded by the poem "The Pesky Sarpent" as read by Mr. Yeo. Additionally, there are two serpent trios that are both amusing and well performed.

The most educational work on this album is Le Mots de Berlioz by Clifford Bevan with text by Berlioz and musical themes that you will recognize at once (and a few that are more obscure). It is written for a low quartet of serpent, ophicleide, buccin, and bassoon supporting a full chorus, which, for this performance, is the excellent Gloria Dei Cantores of Orleans, Massachusetts. (They are featured in three other works on this album as well.) It is a fun piece written in good humor, and it gets pretty wild in spots. And, as far as I know, it is the only existing recording of these three historical instruments together.

For those of you into facts, figures, and the like, this album comes with a wonderful 24 page booklet full of everything one could want to know about these instruments, the music, and the history of what you are hearing. The only thing lacking in the documentation is information regarding the pitch level of the historic instruments and whether it was an issue in the wind ensemble pieces.

For further information, the following links are provided.

Want to purchase your own serpent for those unexpected Period Instrument gigs? The Christopher Monk Workshop in London makes modern reproduction serpents.

This entire review boils down to one statement: Buy this album. It is rare to find so much education and enjoyment in one album that is executed and packaged so well. It should appeal to all teachers, performers, and serious students of low brass instruments, as well as enthusiasts of historical instrumental performances. I am not always a big fan of self-produced solo albums; I am, however, a fan of this one.