Modern Guide for Trombonists and Other Musicians by Richard Begel: A Review 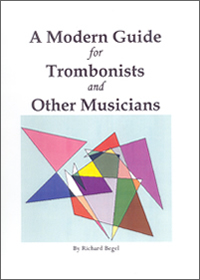 Modern Guide for Trombonists and Other Musicians by Richard Begel. Wealthy Dog Productions 2002

It has been said that if a million monkeys had a million typewriters and worked on them for a million years, they would eventually type the works of Shakespeare. Likewise, many are under the sincere impression that endless hours in the practice room will allow a trombonist to reach the highest level of playing.

Both assertions are patently false. The Internet has proven that Shakespeare's place in literature is secure (millions of humans, let alone monkeys, typing the man-hour equivalent of millions of years have produced far more gibberish than wisdom), and the number of trombonists who have failed in achieving their goal simply by relying on hard work in the practice room is legion.

Sensible students of any discipline know that there is more to success than simply hard work. The combination of talent, hard work and destiny is a triumvirate of unequal parts. It is self-evident that hard work without sensible and focused direction can not only impede progress but it can both develop and reinforce poor habits. Most players know the value of a good teacher to guide and direct. But becoming a performer with a credible expressive voice which is grounded in mastery of the technical and practical impediments which must be conquered requires more than a single influential mentor. A player's own musical person (and persona) is best developed through hearing a chorus of influence, then carefully discerning, discarding, adding and implementing the best of what is known.

This chorus of influence can be experienced through role models (both live and on recordings) and pedagogues (both through live lessons and through written text). Brass players, and trombonists in particular, have a rich library of texts which give the reader much to consider, question, challenge, try and implement. "The Brass Book" (E.C. Moore, Leblanc, 1954), "The Art of Brass Playing" (Philip Farkas, Brass Publications, 1962), "Trombone Teaching Techniques" (Donald Knaub, Rochester Music Publishers, 1964), "The Art of Trombone Playing" (Edward Kleinhammer, Summy-Birchard, 1964), "Trombone Technique" (Denis Wick, Oxford, 1971), "Guide to Teaching Brass" (Norman Hunt and Daniel Bachelder, Wm. Brown, 1968, rev. 1991), "A Complete Guide to Brass Instruments and Pedagogy" (Scott Whitener, Schirmer, 1990) and "Mastering the Trombone" (Edward Kleinhammer with Douglas Yeo, EMKO Publications, 1999), form part of this significant body of literature from which players can mine wisdom and consider a wide variety of ideas. Add to these a number of high quality websites (such as The Online Trombone Journal) and players can scarcely complain they have not had opportunity to be influenced by diverse ideas.

To all of this now comes Richard Begel's, "A Modern Guide for Trombonists and Other Musicians." Begel is second trombonist of the Fort Wayne Philharmonic, faculty member at Hillsdale College, and a graduate of Crane School of Music and New England Conservatory (he is also a Doctoral candidate at Michigan State University).

"A Modern Guide for Trombonists and Other Musicians" continues in the rich tradition exemplified by Kleinhammer's "The Art of Trombone Playing." Begel's book contains 16 chapters covering broad concepts such as "Musicality and Interpretation, " "How to Take Lessons," "Strategic Practicing," "Performance Anxiety," "Trombone Care and Cleaning" and "College Selection for the Music Major." This is not a method book or collection of etudes, rather the reader is pulled into Begel's own rich experience as a student of the trombone for a sensible, focused and useful journey through the main influences in his own musical pilgrimage.

More so than its worthy predecessors, "A Modern Guide for Trombonists and Other Musicians" does not draw exclusively on the authors own conclusions as he advises readers how to tackle the important issues facing performers. Heavily footnoted, the book credits (by name) Begel's own teachers and mentors (Norman Bolter, in particular), sharing what he gleaned from masterclasses, correspondence, lessons, books and conversations. This book is a seamless stream of Begel's own ideas co-mingled with the wisdom of those who made him who he is today. The result is a volume of considerable breadth and scope which is more significant than its 75 pages might belie.

Begel's writing style is direct and to the point; he does not engage in fussy explanations or attempt to impress with a highfalutin vocabulary. Clear communication is his goal. Many chapters contain lists of things for a player to think about - "bullet points" - which in a few sentences give one much to consider. In this regard, Begel's book may be best utilized small bits at a time, reading a few sentences or paragraphs and then sitting back to consider their merit, impact and possibilities. The frequent use of imagery provides a colorful thread through the book. The second chapter, "Musicality and Interpretation," is a very welcome addition to our common thought on what makes a performance truly transcendent rather than just "right."

There are a few music exercises in the book but these are limited to amplifying the concepts in the text, such as development of the upper register. The "Twenty-two Breathing Exercises" are drawn from the Begel's own experience and the advice of many teachers including Sam Pilafian, Arnold Jacobs, Curtis Olson and others. Each is appropriately credited and, in their entirety, represent an excellent collection of exercises which greatly enlighten this important subject.

One of the longest chapters in the book is the one devoted to "Resources." Realizing that his own book is far from the definitive word on the subjects he undertakes to discuss, Begel provides a well organized, lengthy list of additional books, texts, articles and web sites which readers can explore for further information. While this chapter would probably be more useful as a page on a website so it could be regularly updated (several of the website URLs listed are dead links, but Begel fortunately always includes the root page of websites so internal pages, even if showing up as "Not Found," can be located), the logical presentation and scope of these additional resources will help the reader in his exploration of even more ideas.

"A Modern Guide for Trombonists and Other Musicians" is a welcome addition to the trombonist's library. Reading one sentence, paragraph or chapter at a time, or taken as a whole, it is a model of the holistic approach toward learning which has proven to be so successful for the best players we know. As a book, "A Modern Guide for Trombonists and Other Musicians" is eminently useful. As a glimpse into the author's own experience as one who has gathered a wealth of information from diverse teachers and models and integrated them into his own life as a performer and teacher, it is inspiring. Go and do likewise.

"A Modern Guide for Trombonists and Other Musicians" is available from Hickey's Music.