Homecoming by John Jensen: A Review 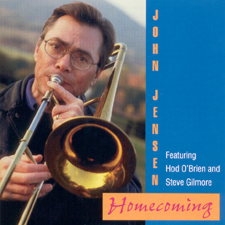 Homecoming by John Jensen Ticee Productions TC25CD. Personnel: John Jensen, trombone; Hod O'Brien, piano; Steve Gilmore, bass; Steve Abshire, guitar; Brooks Tegler, drums; Seguito Turner, percussion. Selections: That Old Feeling, Polka Dots and Moonbeams, Exactly Like You, But Not For Me, In a Sentimental Mood, Time After Time, Alone Together, Blues Among Friends, I Thought About You, Nobody Else But Me, You Don't Know What Love Is

Musicians often get together with friends for a jam session, and later think, "We should have recorded that!" John Jensen did record it. Homecoming is a collection standard tunes, or forms, recorded in one session. With one exception, each song presented was a first take. None of the arrangements were pre-planned; the band just went into the studio and started calling tunes. Jensen did overdub one part, a tasteful muted second trombone on "In A Sentimental Mood," but even this was improvised as opposed to arranged.

The instrumentation varies slightly, but the core group is Jensen, on trombone, along with Hod O'Brien on piano, and Steve Gilmore, who is best known for his work with Phil Woods, on bass. The irregular presence or absence of drums, guitar and percussion does a great job of providing some timbral variation that is often missing on trombone small group recordings.

Jensen's playing is energetic and in the pocket. The Carl Fontana influence is especially evident on "Exactly Like You." He shows a great command of the instrument and classic jazz language, and uses it in a tasteful and musical fashion. Homecoming does not offer intricate arrangements or complex improvisational vehicles, but it does provide honest, swinging improvisations in the classic jazz style on great American standard tunes. This CD fits nicely in the lineage of jazz trombone that flows from J.J. Johnson through Frank Rosolino and Carl Fontana, and it should also fit nicely in your record collection.

Sound clips and ordering information available at at Amazon Musisc.