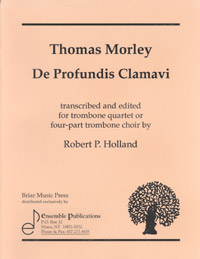 Thomas Morley (1557-1602) was a prolific and well-known composer of English madrigals, and two of them, Now is the Month of Maying and My Bonnie Lass, have become staples of the trombone quartet library since their publication in 1965. Both arrangements feature challenging slide technique but don't go too high, making them suitable for performance in just about any situation and contributing to their enduring popularity among trombonists. It made me wonder, with such a large pool of Morley's music to draw upon: why haven't we arranged more of it? A quick search of the Internet revealed only a few pieces available, such as Shoot, False Love at Hickey's Music, Love Not Me for Comely Grace at Robert King Music, and April is in my Mistress' Face at Lassus Publications. In general though, Morley's music has been sorely neglected.

De Profundis Clamavi appears to be an attempt to change this situation. It's not one of the madrigals, but an example of Morley's liturgical music, a Latin motet. The arranger has included the Latin text, along with an English translation. As might be expected from a sacred work, the tempo is less sprightly and the mood more solemn than the madrigals. The key is D minor (the "saddest of all keys" according to Nigel Tufnell, lead guitarist in the band Spinal Tap) which is an excellent key for trombone. Beautiful harmonies abound, making it suitable for performance at a church service or similar occasion.

The first and second trombone parts are in tenor clef, with the first part ranging from A in the staff to high D. The tempo is marked Moderato sostenuto, which I take to be about 1/4 note = 80, making the piece last for about four minutes. This is a long stretch for the first trombone player, because the part floats in the high range almost the entire time and the longest break is a brief, four-note rest. When we sight-read through the arrangement during a break at orchestra rehearsal, I had to stop playing midway through the piece for a rest. This leads me to think that the first part would be better performed on alto trombone, and perhaps the arranger should also provide it in alto clef.

The third and fourth trombones are in bass clef, with the fourth part descending to low C. Therefore, a bass trombone or large bore tenor trombone with F attachment are required to perform this arrangement. It also indicates that the arrangement probably can't be transposed down a step to help out the first player--doing so would put the fourth down to pedal Bb, which would probably sound too muddy.

Given the difficulties with range and endurance, I can't recommend this arrangement for younger players. It is suitable for university or professional level musicians looking for music to practice intonation and blend with, and it could make a valuable addition to the alto trombone repertoire. The arranger might get more mileage out of the piece by transposing it for other instruments: a quartet of trumpet or flugelhorn, horn, and two trombones comes to mind.