Rochut for Two by Art Lieby: A Review 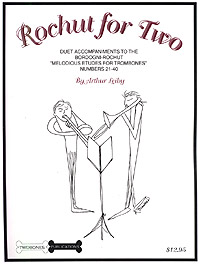 Art Leiby has taken Tom Ervin's lead and supplied a second volume of counterparts to the Bordogni vocalises, most widely known in the edition prepared by Johannes Rochut and published by Carl Fischer. Mr. Leiby credits Mr. Ervin with inspiration and support and Tyrone Breuninger for editorial advice. Unlike other recent publications of Bordogni material, Leiby's duet accompaniments are original etudes "for recreational duet playing and for the teaching studio." They adopt identical page layout as the Fischer edition, hence the title. They range from low E-flat to high C and are in bass clef throughout.

Mr. Leiby's duet accompaniments do not attempt to merely harmonize the Bordogni, nor do they necessarily follow the implied harmony. Rather, they try to function as both full counterparts and stand-alone etudes. There is an apparent avoidance of parallelism. Instead, the accompaniment augments the melody with a variety of means: parallel and contrary motion in unison rhythm, rhythmic and motivic imitation, harmonic outline, and chromatic embellishment. In fact, the chromaticism is frequently Byzantine, both difficult to follow and to anticipate. The accompaniment is typically more active than the melody, resulting in a characteristic busyness and lack of repose.

Most of the accompaniments demonstrate inventive and satisfactory solutions to the requirements made by the melodies. The most successful moments are invariably simple, elegant rhythm exchanges, close imitation, or lines that resolve harmonic tensions built up over several measures. There are, however, many problematic passages that never "set up" correctly or inexplicably avoid a simple, obvious solution. In general, over-reliance on chromatic tones obscures the harmony and tonality (secondary tonalities are mostly lost), unnecessary busyness in the accompaniment weakens the rhythmic clarity and meter, and failure to build and fulfill expectation simply defies the Italian vocal nature of the melody.

The decision to copy the page layout of the Fischer edition has positive and negative effects. The greatest aid is being able to say, for instance, "start at measure 3 of line 4." Judicious cue note are also added for placement in the counterpart. However, unfortunate page breaks in the Fischer are copied in the present edition. Worse, as the musical materials differ in many respects, there are often too few or too many measures per line. This results in many collisions of graphical elements and a variable crowdedness and spaciousness of appearance. A better solution might be to simply add measure numbers in both editions at the beginnings of lines to facilitate stopping and starting.

A worse problem still is the misspelling of many, many pitches with their enharmonic equivalents. For instance, in F Major, G-sharp and A-flat have markedly different functions, though they may arguably sound the same. Sharp keys fare worse than flat keys, where the failure to use, for instance, E-sharp or F-double sharp results in a serious reduction in readability. The absence of courtesy accidentals is also a problem considering the highly chromatic nature of the counterparts. Beaming differs in places from the Fischer, as does placement of some tempo and style markings.

Without the melody, none of the accompaniments survive as sensible etudes. Therefore, pedagogical or recreational use remains the best option. The studio teacher may find, however, that his own challenges and high level of activity in playing the accompaniments make listening to the student difficult. Recreationally, the musical payoff is somewhat modest. Irksome notational irregularities call too much attention away from the music, which comes across satisfactorily much of the time but problematically at others. My impression is that, despite the considerable effort required to prepare the edition, it is not yet ready for publication, and I cannot recommend it on its merits. I would wish instead for a 2nd edition that corrects the notation and simplifies the accompaniments considerably.