The Bordogni Vocalises by David Schwartz: A Review 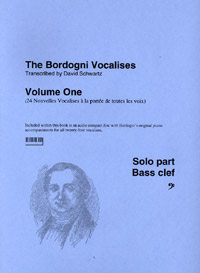 To many trombonists the Bordogni vocalises are known simply as the "Rochut," after the famous edition put forth by Joannes Rochut entitled Melodious Etudes, published by Carl Fisher in 1928. David Schwartz has now introduced a series of transcriptions of these beautiful vocal studies that offers new and potentially very useful tools for the trombonist. Though the new publication has many excellent features, the primary strength of these modern transcriptions is the inclusion of an accompaniment CD with each book of the seven-volume set.

Schwartz's adoption of the original Bordogni accompaniments as an integral feature of his edition has allowed him to return to a literal transcription of the Bordogni exercises from scholarly 19th century sources. Thus, in this edition we find several instances where the notes written by Bordogni, are not the ones we are used to hearing and playing in the Rochut edition. Rochut was obliged in some instances to change chord members in the melodies to provide pleasing phrase endings, avoiding ending phrases on chord thirds and fifths. Schwartz on the other hand was able to return to the original notes because the underlying harmonies have been realized by the accompaniment.

This new publication reasserts Bordogni's original numbering, tempos, and keys. However, Schwartz has taken great pains to help trombonists familiar with Rochut's version to understand the original system. He has provided excellent and detailed charts that correlate Rochut and Bordogni's etude numbering systems, key choices, and tempo indications. In addition he provides accompaniments in both the familiar Rochut keys and the original Bordogni keys and a comparison chart of both editions' tempo indications.

For this review I was able to examine Schwartz's Volumes 1-3 (Corresponding to Rochut's Melodious Etudes Book One) and Volume Seven, twelve duet vocalises, not transcribed by Rochut. I found the overall quality of the printed music and text to be excellent, clear and easy to read, but with slightly quirky spacing at times in the first volume. Volume One begins with the first Bordogni etude in C Major. This is an etude which was omitted by Rochut, but which provides a very good introduction to the vocalise style for students just discovering Bordogni. I find it a very welcome addition that provides a better progression for young students. This same etude is included as number one in the 1996 Tezak Edition of the vocalises, but Schwartz's layout of the copy is better spaced and easier to read.

One element of the printed music which I found to be misleading however was that each of the short grace notes in Schwartz's edition lacked the line through the flag of the appoggiatura. It is this line that indicates that the grace note should occur before the beat rather than on the beat. Mr. Schwartz acknowledges this defect in an author's note in Volume Three, but this seems like an avoidable error in what is otherwise an extremely scholarly transcription. Appoggiatura's aside, the printing, spacing and author's notes become clearer and more helpful in each book. What was merely good and readable copy in Volume One is truly excellent copy by Volume Three, which also includes the author's notes, and tempo charts mentioned above.

Volume Seven, the duet vocalises, is one of the gems of the set. These duets have not been easily available before, and have never appeared with an accompaniment CD. They are for advanced players and can be quite challenging for even accomplished trombonists. They, unlike the solo studies which appear in bass clef (with the unintentional exception of Volume One No. 24), are provided in tenor clef. Although it is true that most players who have the technical facility to play the duets will already be comfortable with tenor clef, I would like to have the option of a bass clef version for advanced high school students to use for ensemble competitions.

I mentioned above that the greatest strength of the new publication is the inclusion of the accompaniment CD's. These CD's provide Bordogni's own piano accompaniments both in Bordogni's original keys and tempos and in Rochut's transposed keys and tempos. This enables teachers and students to use Schwartz's accompaniment CD's with his published transcriptions or with the published editions by either Rochut or Tezak. The CD tracks themselves have been carefully and thoughtfully produced in a way that, with a little practice, makes them easy to follow and to use. Each track begins with two seconds of silence followed by two metronome clicks in tempo and the piano accompaniment on beat one of the first measure. The studies are marked with the notations "solo" and "acc." where the piano drops out and re-enters. I found the piano pauses on interior phrase endings to have just the right feel for the amount of space before continuing. This is of course very subjective but the feeling was just right for me.

Upon my initial work with the accompaniment CD's my feeling that the CD's were the greatest strength of the publication was coupled with the impression that they were also its greatest weakness. The computer generated electronic piano sound can sound tinny and unmusical, with very little dynamic contrast, and almost no articulation control. At fast tempos with repetitive rhythmic figures, the accompaniment can sound either amusing or ridiculous depending on your perspective. It can be frustrating to try to make beautiful lyrical vocal style phrases against a pounding accompaniment. I can report however, that my students felt no such qualms about the electronic piano sounds. The lack of dynamic contrast makes the accompaniment consistently audible and easy to follow. As a teaching tool rather than a performance tool it works quite well, not imposing an interpretation, but rather allowing the student freedom of expression. The student can practice with the accompaniment CD, and can perform if desired with an accompanist using the piano parts available from Tezak publications. I would still prefer a recorded CD of a sensitive accompanist, but the computer generated piano works well enough for teaching good time and intonation to developing students.

The bottom line of this review is that after using David Schwartz's new transcriptions of the Bordogni vocalises I found them to be a helpful teaching tool, and a fun way to revitalize the familiar studies. I will have my students purchase these new solo editions, and will be buying the duets for myself. Although these transcriptions correctly put the emphasis back on the original Bordogni compositions perhaps there will come a time when the Bordogni vocalises are known simply as the "Schwartz."