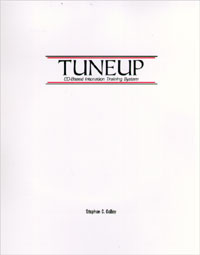 Most students and professionals rely upon the tuner to receive feedback as to "where" the current pitch is being played, either sharp, flat, or "straight up and down." While useful for setting a tuning standard, the chromatic tuner encourages us to introduce a visual crutch into our tuning process. The philosophy behind Stephen Colley's TUNEUP intonation training system is to develop an aural "bootcamp" to help the musician develop improved intonation free of this visual crutch.

The TUNEUP system comes with a forty-eight page book and accompanying audio CD. The text is broken into two large sections. The first section, twenty pages in length, is a well developed discussion of the basis for pure harmony, intervallic structures, and suggestions for using the TUNEUP method. Especially interesting in these discussions is the ease in which Colley mixes technical information like the mathematics behind the construction of pure intervals with aesthetic observations concerning the beauty of pure harmony. It is this intelligent mix of the technical and practical that gives this method its strength.

When you acquire TUNEUP do not fail to read the first 20 pages, for doing so will infinitely hamper success in the subsequent 28 pages. This second half is where the technical information put in the background and the ears are placed to the fore. There are two basic exercises in the book: an interval study in each key; and what Colley titles a "linear harmony model," also in each key. All of these studies can be performed with the accompanying CD, and also in small ensembles without the CD. The interval studies provide the musician the opportunity to play varying scale degrees over a tonic drone. For example, for the first exercise a C "drone" is heard for almost the entire exercise. The musician then plays a series of intervals against this drone with the goal being to produce pure intervals. Throughout the interval exercises the musician is provided with an aural example of the perfectly tuned interval and then left to produce it themselves. First a unison, then (in order) a perfect fifth, major third, minor third, perfect fourth, major sixth, and minor sixth. Also included in the interval studies are repeated pitches employed in different positions in the triad. An example of this would be playing a D as the fifth of a major chord as opposed to a D as the third of a major chord. These Ds are not going to be the same exact pitch, a fact made very evident by the TUNEUP system.

The second exercise is a four-part harmonization of the hymn tune St. Elizabeth (known to many as Fairest Lord Jesus). The pure electronic tones produce perfectly tuned chord on each and every beat. It is a real challenge to play along with any of the four lines. My students find it frustrating while I find it humbling. For both of us, however, intonation in ensembles has improved a great deal in the short time we have applied this system in our studio. Both this exercise and the interval studies are provided in all 12 keys, in both bass and treble clefs.

There are some, admittedly minor, areas for improvement with the presentation of this system. There are gaps of silence in some of the exercises, causing one to lose their place within the exercise. After a few times through these are easily negotiated, however. Some might fault with the timbres used on the audio CD. To this point I believe Mr. Colley would offer that this is not an aesthetic exercise, and this reviewer would tend to agree. The tones are harsh, pure, electronic sounds - not any kind of timbre that we would want our students to emulate. The timbre is very effective for hearing the beats which result from flawed intonation, and this is ultimately the function of this method. Finally, It would be relatively simple for Mr. Colley to expand the linear harmony exercises to include other tunes with expanded harmonies.

In the end, Mr. Colley has produced a fundamentally solid and pedagogically excellent tool that teachers and students alike can use to great benefit. This reviewer highly recommends that you make it a part of your daily practice routine, and also investigate ways to introduce it to your small ensembles. More information can be found at the TUNEUP web site: http://www.tuneupsystems.com.